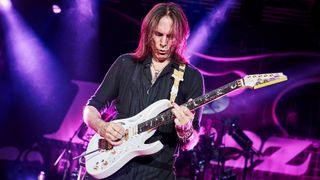 Steve Vai’s first collaboration with Ibanez, the JEM, debuted in 1987. In the more than three decades since, the revolutionary electric guitar (and let’s be frank - with its monkey grip handle, lion’s claw tremolo cavity, five-way HSH pickup options, deep cutaway and eye-popping fluorescent finishes, among other features, it was indeed groundbreaking) has become firmly established as one of the most popular, celebrated and instantly recognizable designs in modern guitardom.

The JEM has undergone updates and modifications since that first iteration, from changes in pickups and fretboard inlays, to wild new finishes (floral patterns, a limited-edition swirl with Vai’s blood mixed in) and even a 20th anniversary acrylic-body-with-LED-lights model. All the while, Vai acknowledges, “Ibanez has been extraordinarily supportive of all of my ‘imaginative meanderings’ over the years.”

As if to prove his point, Vai recently unveiled - exclusively to Guitar World - his latest JEM-related imaginative meandering with Ibanez - and it’s a big one. So big, in fact, that this creation is not even a JEM at all. Rather, Vai has spent the last few years developing and designing a brand-new guitar with the company: the Ibanez PIA.

For the design, Vai says, “I wanted something simple, and something that for me also had personal meaning.” Those ideals are reflected in the guitar’s moniker - the PIA. “It stands for Paradise in Art,” Vai says. There’s a second personal meaning as well. “It’s also my wife’s name,” he adds.

Spec-wise, the new guitar resembles a JEM in some very foundational ways. Its measurements - 25.5-inch scale, 43mm neck width at the nut and 58mm at the top fret, 430mm fretboard radius - are, to be sure, certainly JEM-like.

But for the most part, this is where the similarities begin and end, as almost every other facet of the guitar has been subtly tweaked and reimagined in service of a stunning new design.

For starters, the monkey grip handle, arguably the JEM’s defining feature, is still prominently displayed on the body just above the pickups. But the PIA’s grip is unlike any you’ve seen before. In place of the standard JEM cutout with four “finger” notches, the new design, which Vai has named the petal grip, is comprised of two complimentary cutout swoops that resemble, well, the petals of a flower.

“From the beginning, it was always in the back of my mind that if the JEM grew legs and started running, there might be a time where I would change the hand grip,” Vai says. “I thought we could do something different and also ‘more.’ And so we came up with the petal grip.”

Petal to the metal

As for the inspiration behind the unique design? “I think flowers are beautiful ,” Vai says simply. “They’re sort of little eruptions from heaven that come through the earth. There’s a softness and a simplicity to them [laughs].

I know that in our world being attracted to flowers may not be a masculine trait, but I could give a shit about that stuff - I like them. I mean, I could have used skulls and crossbones and things like that, but boy, has that been done!”

But that’s not all. “Also, I’m a beekeeper,” he continues. “I love bees and I keep them, and the grip design is a bit reminiscent of the way certain honey bees sleep inside of flower petals.”

Finally, he adds that the petal grip is “reminiscent of the yin and yang symbol - a representation of balance. And I think we really achieved that balance in the overall design of the PIA, because the grip is something that works with the shape of the guitar. If you look at it, there’s synergy in the whole layout of the body.”

Indeed, the PIA encompasses a unique and continuous flow, from the petal grip to the uniquely contoured body to the fretboard inlay and beyond. “There’s a certain aesthetic - mathematical angles and arcs, different ratios - to this design that we’ve incorporated into various elements of the guitar,” Vai says.

“For example, we were so specific about how the petal grip would work with the guitar’s curves, and we even reshaped the body a bit from the JEM - the contours are all different, and they’re really nice because when I sit with this guitar, it just fits so beautifully to the body.”

Furthermore, the petal motif extends to the PIA’s fretboard inlay work, which at first glance is reminiscent of the vine-like Tree of Life pattern of some JEM fingerboards, but on closer inspection proves to be a singular abalone and pearloid creation that Vai is calling the PIA Blossom inlay.

When it comes to the real nuts and bolts of the guitar, Vai proudly rattles them off from memory for us: alder body; five-piece maple-walnut-maple neck; rosewood fingerboard (scalloped at the top four frets) with stainless steel jumbo frets; Edge tremolo bridge; Gotoh SG381-07 tuners; gold hardware; locking nut; and a pickup set consisting of two humbuckers with a single coil in the middle.

He pauses when he comes to this last feature. The HSH pickup layout is, of course, the classic JEM configuration, but these are not JEM pickups. Rather, Vai collaborated with DiMarzio on a new design, the UtoPIA, that, he says, “is sort of based on my Evolution pickups, but with less mids, a tighter bottom and a little lower output.”

And speaking once again about the petal grip, at this point in our conversation Vai flips over the prototype PIA he’s holding in his hands to reveal, yes, that very same design emblazoned on the backplate. And there’s another feature of the backplate that Vai is particularly jazzed about - the fact that it is attached to the guitar’s body via magnets.

“I’m always trying to do away with inconvenience,” he says. “And one of the things that has always seemed kind of inconvenient to me is that whenever you need to take the backplate off the guitar - which is relatively often for someone like myself - you have these little screws that you have to take out and put down someplace and hope they don’t fall on the floor, because god forbid, if they do, they’re lost forever - they get eaten by the carpet, kind of like picks. So we’re just chipping away at things that are unnecessarily complex.”

Vai may eschew complexity, but at the same time, he also designs his guitars to dazzle. And in this arena, the PIA, like the JEM and Vai’s seven-string Ibanez Universe before it, is quite the looker.

The initial rollout will see the PIA offered in four eye-popping finishes: Stallion White, and limited-edition Sun Dew Yellow, Envy Green and Panther Pink colors. And just like the original JEM, which came in a choice of three vibrant hues that were also represented in the guitar’s disappearing pyramid fretboard inlay, the PIA Blossom inlays on the limited-edition models incorporate acrylic pieces that are reflective of the finish options.

It’s a sly allusion, but as Vai sees it, “whenever I’m in a position to have this much creative control, I try to exaggerate it and create a story of sorts.”

And why not? As he explains, “It’s so much fun to work with [Ibanez owner] Hoshino, because I’m always surprised at how far they’ll go with me.”

In fact, that is very much the reason Vai chose to team up with Ibanez in the first place. “Back in ’84 or ’85, when Ibanez was looking for a hot new artist to play their gear, I approached them with the JEM,” Vai recalls. “And I said, ‘Oh, and by the way, I would like it to be released in three fluorescent finishes. With different color pickups. And a monkey grip. You know, the whole deal.”

As for the origins of Vai’s out-there ideas? “One thing was that I had been playing with Frank Zappa, and Frank was perpetually creative and never made excuses,” he says. “Frank would imagine something and then kind of manifest it. I was very young and impressionable, so I figured, ‘Well, that’s how it works - you get an idea and you just do it, right?’ ”

When Vai teamed up with Ibanez, it’s worth noting, the company was hardly a major player in the guitar universe. But, he says, “One of the reasons I went with them is because the other manufacturers at the time would simply never entertain the idea of the guitar I had created. They would just never take those risks. But Ibanez was all over it.”

Take the body rout behind the tremolo as just one of many examples. “The way that came about,” Vai recalls, “is that I was sitting around one day many years ago with my Charvel ‘Green Meanie,’ experimenting with all the new Floyd Rose tremolos that were coming out.

"I could never understand why you couldn’t pull up on the bar to have the notes go really sharp, but then I realized that the reason was because the tailpiece was being confined by the cavity. So I took a screwdriver and a hammer and just chiseled out all the wood that was obstructing the bar.

"I started using it and I remember how excited I was that I could pull up on the strings and they would basically go sharp until they fretted out. Ibanez created the lion’s claw design as a sort of refined version of my cutaway, and we did it on the JEM. And I’m pretty sure I hadn’t seen anything like that on a production-model guitar before that.”

From there, he says, “I wanted 24 frets, and that was very rare at the time. I wanted the last four frets scalloped because, like Yngwie Malmsteen says, ‘scalloped frets allow you to really grab the note by the balls!’ I wanted a deeper cutaway. I wanted a humbucker and single-coil configuration that made it possible to get those Strat-y, ‘in-between’ sounds. And I wanted to contour the body so that it looked sexy.”

Vai got everything he wanted, but, he says, “With all of these things, I had no expectations about how they would be received. It wasn’t as if I was sitting there going, ‘What does everybody else want? I gotta know my market…’ Because I had no idea. I was just doing it based around my own comfort zone. So I was completely shocked by the success of the JEM.”

More than three decades later, he still is. “I’m astonished,” he says. “I cannot believe the dedication from the JEM enthusiasts and the collectors that have made this guitar thrive. But I think it all comes back to, when I first set out to design a guitar specific to me, I really felt a lot of freedom in doing it.”

That freedom extends to the new PIA as well. “Just like the JEM, it’s a very sleek, very kind of metal machine,” Vai enthuses.

“It’s built for tone, for speed, for intonation, for real performance. The way it sits on me, the way it sounds, the way it plays... the PIA really just feels like home. The minute I got my hands on it, I instantly felt a deep connection to the instrument.” And he smiles broadly. “It’s a guitar built for freakdom, you know?”