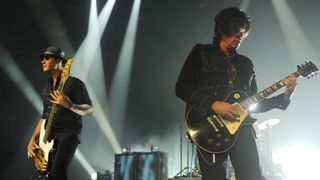 “For me, all songs start on an acoustic,” Robert DeLeo says. “Even going all the way back, whether it was Plush or Interstate Love Song, I wrote those on acoustic and that’s where it all began.”

His brother, STP guitarist Dean DeLeo, concurs. “You probably wouldn’t believe me, but I wrote Meatplow, on an acoustic,” he says, referencing the excessively grungy leadoff track to the band’s smash 1994 album, Purple.

“It’d be the last song on earth you’d think started out that way, but I happened to be sitting there, I felt this little kind of thing come over me, I grabbed the nearest guitar and out came that lick.”

Robert picks up the thread. “Then, after a song is written, you have a decision to make about whether to keep it in that acoustic state or to electrify it. And sometimes the result is a heavy song.”

But this time, he says about Perdida, “I think the sentiment was to keep everything in that sort of acoustic, ‘writer’ mode.”

That said, while Perdida does indeed find Stone Temple Pilots - which in addition to the DeLeo brothers includes drummer Eric Kretz and singer Jeff Gutt, who joined the band in 2017 - presenting their new material in, as Robert puts it, acoustic, ‘writer’ ” mode, these are hardly raw, skeletal demos.

Rather, the 10 tracks are some of the band’s most densely layered and melodically complex songs to date, built on beds of strummed and picked steel- and nylon-string acoustics in a variety of tunings, and then outfitted with electric and slide guitar and all manner of percussion.

From there, the songs utilize everything from female backing vocals and vintage keyboards, to flute (I Didn’t Know the Time), alto saxophone (Years) and violins, violas and cellos (Perdida) - not to mention atypical stringed instruments like guitarrón (Miles Away) and Marxophone (She’s My Queen).

As for what is behind this instrumental exploration? “Just like we have a great love for songwriting, I think there’s a great love for the craftsmanship of instruments,” says Robert, who plays the guitarrón and Marxophone parts on the record. “Instruments from the past are really appealing to me, and there’s something about them that makes me want to make music. They make me want to express myself.”

Plus, adds Dean, “There’s not a lot of places you can use Marxophone - so when you have the opportunity where it can fit in, it’s like, ‘Let’s use it!’ ”

He laughs, then continues. “But really, what it is with this band is there’s a concerted effort to always keep new colors coming in. And this record, this is just what has been on our minds and in our hearts.”

This may seem like an obvious question, but why do an acoustic record now?

Dean DeLeo: "We just came off a long year of touring and honestly, I’ll be the first one to say it - we were sick of loud guitars, man! [Laughs]. But seriously, I don’t know that I really have an answer for that.

"It’s just something we’ve been wanting to do for a long, long time - many, many years. So I would have to say time dictated it. It just felt like the natural thing to do. And it’s always been fun for us to explore this side of our sound."

There’s something about your music that really lends itself to an acoustic format.

Robert DeLeo: "I think it has to do with the time that we grew up in. Being five or six years old during the height of the singer-songwriter era in the early '70s… I mean, I feel very fortunate to have grown up on those songs and those people. It’s the milk that was in the musical bottle for me, and I grew up sucking on that bottle.

"And I still hold that music dear. I still enjoy listening to people like Burt Bacharach and all those artists that were really serious about arrangements and songwriting and were really trying to raise their craft up a few notches. It was a beautiful time, man. My first concert was the Carpenters, when I was five years old. And I still love the Carpenters."

Dean: "I challenge anyone to go back and look at the Top 10 albums in Billboard in the '60s and '70 as opposed to the last 10 years. You’re going to see Carole King’s Tapestry, the Rolling Stones’ Sticky Fingers, Al Green - real things. I mean I still listen to things like those early Cat Stevens records, Crosby, Stills & Nash, Neil Young, and I just can’t believe what I’m hearing come out of the speakers.

"And I was hearing all that stuff firsthand as a boy. You turn on AM radio and you hear Heart of Gold, and then Goodbye Yellow Brick Road comes on… I mean, that’s mind-blowing, you know? So all that music was pretty impactful."

How did you go about composing and arranging these new songs?

Dean: "Robert and I each came in with our songs pretty well completed. On the things that I wrote, it was just me sitting down with Jeff and an acoustic guitar and just playing it. Jeff would kind of hum along and then eventually a melody would stick. And he’d usually be on to something within minutes.

"He’s extraordinary that way. But in general I find that you shouldn’t spend too much time on a song. If it doesn’t happen within minutes, you’ve just gotta kind of move on."

Robert: "For me, it doesn’t really start out musically. It starts out emotionally. My emotions kind of guide where I want that piece of music to go, and then I’ll sit down and just start putting my fingers in different places and think of how I want to portray it rhythmically and express it rhythmically.

"Once the chords come into play, that’s when a melody kind of comes over it. And I think with this record, the songs that we contributed, there were some heavy, heavy emotional things that Dean and I were trying to express musically, and it was just a matter of respecting each other’s space."

As far as expressing heavy things, given the more somber feel of the music, combined with the title of the record, which is Spanish for loss, might lead people to try to connect this record with some of the very public losses Stone Temple Pilots have experienced over the years - specifically, the deaths of your two previous singers, Scott Weiland and Chester Bennington. Would that be fair to say?

Dean: "Well, let’s let the listener take what they want from it."

Robert: "You know, I’m not going to exclude that, but it’s also far more personal for me. I don’t want to speak for Dean, but for me this is a very, very personal record about my experiences and my decisions and my choices. Just what’s been happening in life over the past couple of years.

"It’s something that needed to be done, something I needed to get out and needed to express. And you know, I’m still writing songs in this sort of format, even now that the record is done."

What were your main instruments on the record?

Dean: "My gosh, we brought in a lot of stuff. I had a couple of prewar Martins, I had a 1950 [Gibson] J-50. I had a lot of wacky Kay stuff, a beautiful Guild 12-string. There were tricones, mandolins.

"My friend Bruce Nelson built me a Strat that’s just gorgeous, and that guitar appears on the solo on Three Wishes and on the outro of You Found Yourself While Losing Your Heart.

"Then I also had these Frankenstein-like guitars that I paid nothing for - one has a Danelectro Teardrop-type body and one has the Longhorn body. And they say Danelectro on the headstock but they’re really not. They’re kind of like cheap, junky, almost borderline toy guitars.

"And I’ll tell you, man, I bought these things, I’m going to say 20 years ago, thinking one day I’m going to use these because they have a very, very, very unique sound. And they do - the Teardrop one, I believe, doubles the violin on Miles Away, and it was just the perfect sound for that moment. And those things have been sitting in my storage for dang near 20 years! [Laughs]"

You played guitarrón too. How did that come about?

Robert: "In some of these songs I was hearing an upright acoustic bass, but I can’t play one. So one day I planned a field trip to go out to a really groovy spot, the Folk Music Center, out in a cute little town here in California called Claremont, which was started by Ben Harper’s grandfather.

"It’s a beautiful store, almost like half museum, half retail. And I was interested in trying to find a guitarrón, which is like a mariachi bass. It has eight strings and it’s fretless. Well, I wouldn’t really know what to do with that. But they had one there that was fretted and had been converted to a four-string, and I was like, “this is perfect.”

"And I used it on three songs on the record - the title track, She’s My Queen and Miles Away. And then the Marxophone, I pull that out whenever I can. It’s like a combination of an autoharp and a hammered dulcimer. It’s the coolest instrument. But you know, we had Dobro and mandolin and all these different things. Dean and I kind of just pool all our stuff together. It’s like a vintage guitar store in the studio! [Laughs]"

In addition to the thoughtfulness that went into the instrumentation, there’s clearly a lot of consideration given to arrangements and chord structures in these songs.

Dean: "The arrangement is a pretty important part of the puzzle, you know? And it’s real easy to get caught up in a verse/chorus/verse/chorus/bridge/chorus type of thing. So you have to be conscious about not doing just that. Or, I hear in some bands, they like the key of, say, D, and every song is in D.

"But fortunately for us, Jeff’s range is diverse so we can write in a lot of different keys. And I think that’s something we paid attention to on this record - finding a real comfortable guitar key. So there’s a concerted effort there to really think about these things.

"And as far as chords go, one thing that has always been appealing to me is taking nonconventional chords or voicings and implementing them in a way they wouldn’t normally be presented. I mean, look, it’s all about presentation, right? Plush could have been cut on a nylon-string, you know? It’s just all about how you present it."