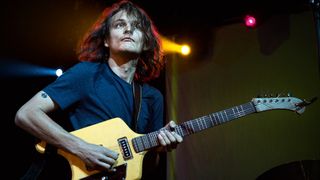 “My dad played guitar, and when I was a kid, he used to sing my little brother and I to sleep every night” says Stu Mackenzie, bandleader of Australian garage-psych innovators King Gizzard & The Lizard Wizard.

“He was a young dad, and he was learning, so it was this beautiful experience of falling asleep listening to him work out the song. It was far from performance; I think it was his meditation as well.”

Through these humble beginnings, the instrument would remain a background instrument for the young Mackenzie, until he was presented with an alternate take on guitar music. “Becoming a teenager, guitar was always something that my dad did, and therefore it wasn’t ‘cool’ [laughs].

"I guess, as a classic Australian, it was seeing videos of AC/DC playing live that made me think, ‘No, actually, guitar is cool!’ The music my dad liked, I like now, but it wasn’t electric guitars with loud, primal energy. It was Bob Dylan, Neil Young and Paul Kelly. So seeing AC/DC on TV made me say, ‘Please, Dad, can I have a guitar?!’”

“My dad was left-handed, so initially I learnt to play upside-down. Because of that, I can still have a fiddle on an upside-down guitar - it’s still ingrained in my brain a little bit. After a few months, my dad very kindly said, ‘Okay, I think Stu’s ready now.'

"I was 15 at the time, and a lot of my friends sang or played piano or drums, and I felt like I had to catch up. So a lot of my adolescence and high school years were about trying to catch up to my friends who were more accomplished or had learnt more than me.

"I always felt like it was never about the skill, just about being good enough to join in on the jam and the hangout. That was the drive.”

Speaking of the group’s origin, Stu tells TG: “We were not long out of school, and to me, it was starting to get annoyingly serious. I was like, ‘Come on, guys - we shouldn’t know what we’re supposed to be doing now. Let’s just make the easiest music possible and have fun and jam’.

"I guess King Gizz at the time was made in order to be a loose, improv-type project, and the earliest music we made was like one or two chords with a couple words, so no-one had to go to rehearsals [laughs].

"You could rock up with a guitar on your back or a tambourine and you could play, or you could yell into a microphone and join in. We didn’t have a rehearsal for years!”

As is the case for many of us, Stu’s early gear holds a certain sentimental value for him to this day. “I saved up and bought a ’91 Fender Japanese Strat”, says Stu. “I still love it. I added some extra frets so it’s tuned quarter-tone up and down. It’s 24 frets an octave, so you have to sharpen your fingertips to get in there these days.

"That was my main guitar. I worked my part-time job as much as I could to save up for that thing, and I really loved that guitar. That’s what’s being used on the first few Gizz albums."

However, when it comes to choosing gear, Stu often takes a more economical approach.

“I’ve always gravitated towards standard stuff. I like standard gear, because I like being able to replace stuff - being on the road and not having a bizarre amp so that you can get the same one. I’m so aware of how breakable everything is.

"I’ve always liked [Fender] Hot Rod DeVilles because they’re replaceable. I have a really simple pedalboard that hasn’t changed a huge amount over the years.

"I love [Jim Dunlop] Crybaby Wah pedals, just the standard model. I’ve got a pretty low-tech set up, which I like. I feel anxious if I’ve got rare stuff [laughs].”

But surely this mindset of only using tried-and-tested equipment goes out the window when it comes to recording for a band as sonically varied as King Gizz?

“I definitely use a lot of different stuff in the studio”, confirms Stu. “My approach has always been to not stress if I can’t recreate it live, because you just figure out something else. The studio is an adventure to me. You’d borrow a guitar pedal off your friend, use it on one song and give it back - there’s really no rhyme or reason to it.

"You can try stuff and use broken analogue gear and tape machines that are f*cked - that’s my jam in the studio. It’s the exact opposite to my approach to the live performance stuff, because you’ve only got to do it once.”

“I’d been playing this 12-string Hagstrom for years, and I love that thing – it has such an amazing sound. The pickups are microphonic and it feeds back in an amazing way. That’s the 12-string on most Gizz recordings, but it was made in 1967 and it’s just f*cked.

"I can’t play it live - the neck is all warped; the tuning pegs are so stiff. I’ve replaced so many things on it over the years that it’s just got to the point where I give it to someone to have a look at and they’re like, ‘You play this thing live? You’re an idiot!’ [laughs].

"So I’d been keeping my eye out for another 12-string for literally years before I found a 12-string Gibson SG. Every time I’m in a new city, I’d go to a guitar store and look for a 12-string that actually worked and stays in tune. It took a long time before I found that SG, and I love it. It’s a great, functional guitar. It sounds very different to the Hagstrom, but I’ve just learned to embrace its sound.”