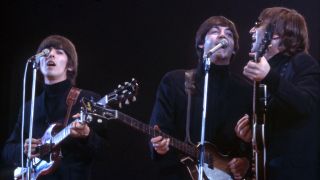 The footage from the Let It Be sessions leaves no question as to the band’s gear choices during that time. George Harrison is often seen playing his custom-made rosewood Fender Telecaster (serial number 235594), which he later gave to Delaney Bramlett, and “Lucy,” the 1957 Gibson Les Paul Standard electric guitar (refinished to cherry red) given to him by Eric Clapton and famously seen in the Revolution promo film.

John Lennon is rarely seen without his stripped-down Epiphone Casino. Paul McCartney uses his 1963 Hofner 500/1 exclusively, although he can be seen playing his 1961 500/1 at Twickenham Film Studios (that model was stolen soon after filming - read on for the full story…), while his Rickenbacker 4001S was also present, but only as a backup.

Lennon also plays the bouncy solo on For You Blue on a Hofner Hawaiian Standard slide guitar.

Additionally, Harrison played through a Leslie 147RV revolving speaker cabinet, as heard in countless hours’ worth of studio outtakes and on his Telecaster solo on the single version of Let It Be.

Speaking of Beatles gear, the gang at Hofner recently launched their #tracethebass campaign, which aims at tracking down McCartney’s stolen Hofner 1961 500/1.

“Someone, somewhere, knows what happened to this bass and someone knows if it still exists and where it is now,” reads the Hofner website. “This information is out there if only someone would provide it. We strongly believe it is time for this bass to return to its owner, Paul McCartney, if it still exists.

"It is such an important instrument, we all deserve to see it again. So we offer the following to anyone who can positively give information about the bass:

Here are the specs:

If you have any real information about this bass - no conspiracy-theories! - please write to thelostbass@hofner.com.

For more on this topic, head to Google and search for “Hofner #tracethebass.”