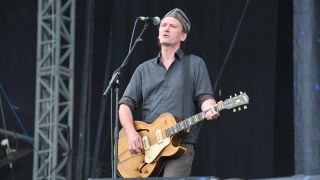 The ES-295 has played a prominent role on every subsequent recording he’s made, as it delivered exactly the sound he was looking for.

“When you find something that you express yourself through the best - something that is completely your sound - why would you use anything else?” he said in the May 2016 issue of Guitar World.

Geordie uses very heavy strings but tunes down a whole step to DGCFAD to make the string tension more comfortable, with the added benefit of making the tone heavier as well.

While not a copy of Geordie’s PA:CE/Bell Electrolabs ADT units, the Keeley pedal employs similar pitch-shifting and delay processing to generate very distinctive chorus/modulation effects. The amp should be dialed just beyond the onset of overdrive to retain the punch and definition of the strings.

In addition to enhancing the guitar’s resonant twang, the ES-295’s Les Paul wraparound trapeze bridge allows Walker to create subtle vibrato effects by pushing down on the tailpiece to ease string tension, which he certainly does to great effect when it comes to the chorus of Eighties.

Another key to Geordie’s highly distinctive, richly textured tone is his stereo dual-amp setup with chorus/delay units. From Killing Joke’s early days through the mid Nineties, he used a pair of Burman Pro 2000 heads, each driving a custom-made Burman 8x10 speaker cabinet.

Manufactured in Walker’s hometown of Newcastle during the late Seventies and early Eighties, Burman amps were developed by Gregg Burman and also used by Scott Gorham of Thin Lizzy, Allan Holdsworth and some bloke named Eric Clapton.

Geordie plugged his ES-295 directly into an Electro-Harmonix Deluxe Memory Man, which provided slapback echo (here at about 132ms with two repeats) and subtle chorus modulation while also splitting the signal to a pair of PA:CE/Bell Electrolabs ADT units, which stack additional layers of chorus modulation and delay effects to generate a lush, vibrant wall of sound.

Like the ES-295, the ADT units remain mainstays of Geordie’s rig to this day and play an essential role in his highly distinctive signature sound. Ambience comes courtesy of meticulous room miking instead of the amp’s reverb or studio processing.