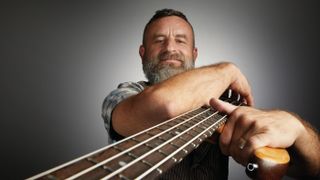 In the center of Los Angeles, in a building modest in stature but rich in history, Justin Chancellor stands alone between stacks of amps and a maze of pedals, aggressively picking his bass and blasting a tone that’s as unique to him as his DNA. Whiteboards are scattered across the room containing song formulas that resemble complex astrophysics theories alongside Danny Carey’s towering drum kit, Adam Jones’ guitar gear, and a lone microphone in the corner that will eventually be occupied by vocalist Maynard James Keenan.

This dimly lit and ornately adorned studio is the very room where Tool has written every album since its inception in 1990, and is currently where they are laboring over the band’s highly anticipated fifth record, which has been ten years in the making.

As Chancellor removes his bass and steps into the control room, he sits behind a computer that displays countless takes of working material. Like every facet of Tool, these files will remain a mystery shrouded in silence and met with wild speculation from fans, at least for the time being. But Chancellor, 45, doesn’t skip a beat in opening up and describing the recording process.

His excitement in discussing his bandmates’ penchant for dissecting riffs, the navigation of odd time signatures, and the cathartic experience of performing live exudes a deep ebullience that has remained intact since he first moved from London to join Tool in 1995. Though Justin never revealed a release date, title, and track list, the trailblazing bassist radiated intensity and hunger—and confidence that the album will be well worth the wait.

What stage are you at with the new album?

"We’re pretty deep into the writing process now, and we’ve narrowed things down to big groups of ideas. For the past few months we’ve been working on one of the newer songs fairly exclusively. We get the gist of it and find the main themes that make up the skeleton between verses and choruses. Then we explore different ways we can depart from that and come back to it and flip it upside down, and take the time to see what else is there. Everyone knows we take our time. We’re really trying to be responsible with ourselves in trying to discover ideas that haven’t been discovered before. It’s kind of an alchemy, how we experiment."

So it can take several months for just one song?

"It can. I wouldn’t say any song comes quickly, but some songs have a simpler theme than others. We get pretty excited by the prospect of a new angle on what we’re doing, and as a result we go down a lot of side roads. To be honest, we enjoy that part of the process most."

What causes such large gaps of time between Tool albums?

"Writing is a grueling process for us, and once we finish an album, we go on tour for a couple of years. Plus, we’re always very involved in our own business, so we need a break when we come back. We’ve also been through a lot of difficult lawsuits, which we deal with ourselves, and they’re a bit of a bummer and not inspiring creatively.

"But we’ve fought to be in this position, and it’s almost a responsibility now to take the time to explore special concepts while we’re on this planet. We’re our own worst critics; we’re doing our best to find something that blows us all away, and we want each other to be completely happy with what we produce. I’m excited that there’s going to be another album and the material will be very inspiring. So why rush it now?"

How sick are you of people asking when it’s going to be done?

"It’s understandable, and it’s a compliment that people are excited to hear it. But it’s difficult to hear that and not feel some kind of guilt. All I can say is that we’ll go back Monday and do our best to finish it for you, although that’s not really how it works. But we know the listeners will be happy with it when it’s finished.

How do you, Adam, and Danny typically write together?

"Adam and I usually have the source material we’ve come up with together here. We’re playing pretty much nonstop right now, so a lot of ideas are coming out. Often, Danny and I will be playing something and Adam will rush into the room and tell us to record it, and then we’ll spend the rest of the day working on it to see if it’s worthwhile.

"And of course we have a whole treasure chest of ideas on our phones that we record on our own. Basically, Adam and I have riffs and Danny has rhythms or different time-signature beats, and we try to keep them basic before bringing them in to see what the other members will do with them. We establish a riff so we and the listener can identify it, and then we say, Okay, now how far away from it can we go on this journey?"

What is your bass playing like on the new material?

As far as my own perspective goes, I’m trying to find more dynamics in my sound, and I’m trying not to execute everything perfectly. I’m attempting to introduce more feel into my playing. Over the years of being in Tool, a tremendous responsibility has built up to perform the role and play to my highest ability. Now I feel that I can dial it back a bit and insert a little more music into my playing. I’m referring to subtleties—individual note choices here and there, and melodic variations. When we’re playing live I always get to explore, but when I’m too concerned about doing it right, it can take me out of the moment.

What is it about odd time signatures that excite you?

I naturally hear rhythms in strange times. You can make anything straight time when you put four beats behind it, which is something that we take full advantage of in our music. And we’ll even overlap time signatures at points, or take an odd meter and straighten it out within a riff. A lot of times a riff will come to me when I’m walking my dogs or driving around, and when I go to count it out it’s usually in an odd meter. But then again, I have the advantage of Danny Carrey being our drummer, so I can play anything and he latches right on and makes it better. I can bring him something in 7 and he’ll be right on it. Even if something sounds a little uncomfortable, Danny finds a way to groove through it and make it come alive.

My role is to marry things together—that’s the duty of bass in general, as the glue in the lower register. It’s something you feel that merges the kick and the guitar strings and the voice. It has melody, but it’s deep down there so it can support everything. In our band, there are moments when we allow the guitar to become the glue and the cement holding down that role, which allows me to explore. A lot of my explorations are in a higher register because room is made for that to be possible. Most of the time, Adam and I will meet in the middle, and then I can drop down to a lower octave and it has a greater impact. When Adam holds down the rhythm and I conduct the harmony, then it embodies a whole other emotional tone.

Why do you think Tool is so wildly idolized?

"There’s a vulnerability to our music that attracts people. Maynard is up there with the greatest vocalists, I think Danny will go down as one of the best rock drummers of all time, and Adam and I have our own styles. We’re not the greatest, but we try really hard, and there’s an honesty about it that comes through. People can hear that and relate to it on a deeper level."

How does it feel to have such a ravenously loyal fan base?

"I’m still like a little kid about it, where I’m just so happy and excited that people want to come to our shows and watch us play. I still go outside the venues and take a picture of our name on the marquees.

"I still feel like I’m trying hard to be in a good band, I really do. And I think that’s a healthy approach. If you start to believe the hype about yourself, then you start to lose the bigger picture, and your focus is in the wrong place. You get to enjoy that kind of gratitude when you play your live show, so you don’t need to spend the rest of your time thinking about it."

What are the live shows like from your perspective?

"They’re absolute bliss; there’s nothing else like it. Because our show is so live and we don’t use any clicks or sequencing, there’s always an opportunity to pull off something we’ve never done before at the level we want to.

"I always aspire to achieve out-of-body experiences while we’re playing. You connect on such a deep level with the fans who are watching you and listening to the music, and all that has led up to it. You’re always going for that. You never phone it in. It’s such an incredible, emotional experience."

What advice would you give to a fellow bass player?

If you’re going to play bass, then play bass how you play bass. You can learn technique and theory, but we want to hear what you have to offer. It’s okay to be inspired by other people and it can be a useful learning tool to play other people’s music, but let out what’s inside of you.

"And even if you’re insecure about it and think it’s not important, know that it really is. When someone else hears you play, they’ve never quite heard that before, and it’s entirely unique. Find your voice and don’t be afraid to explore it."