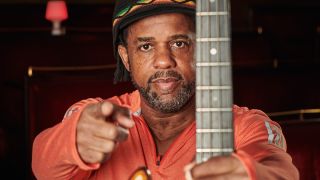 It’s a rainy day in Soho as I make my way through the hustle and bustle of London to Ronnie Scott’s famous Jazz Club. The Wooten Brothers have a sold-out show tonight, and as I make my way through the doors, I’m greeted by a group of music fans desperate to buy tickets, such is the buzz Victor Wooten and his incredibly talented brothers have created.

Victor, the youngest Wooten brother and the best-known due to his following among bassists worldwide, has been interviewed numerous times about his groundbreaking bass skills, unique techniques and innate musicality – which begs the question, where did it all begin?

The answer lies in the siblings’ upbringing – as I found out when I sat down in a quiet corner of the club with Victor, Joseph (keys/vocals), Roy (drums) and Regi (guitar/vocals)...

"They were so close in age that when Victor and I came along, we were sort of the second set. The first set were so good so fast that we were naturally inspired by how they did it, and we wanted to join in with what they were doing. It gave us a good foundation, and we went on from there.”

Roy adds, “I think that one thing that Regi was always good about was getting Victor and Joseph to practise. There’s something about that at an early age that gave Victor and everyone a focus beyond just being someone who’s out on the playground having fun. That focus went from when Victor was two until he was about five, when we were already opening for groups like War and Curtis Mayfield. Regi talks about what he showed Joseph and Victor, but it’s what they did with it that is the magic."

Regi, the eldest brother and the one who inspired and encouraged his younger siblings throughout, sits quietly in the corner, letting his brothers speak – until I probe him for his point of view.

“Really, they said it all,” he smiles. “I’m just glad they stuck with it! In the beginning I was trying to provide incentive. With Victor and Joe, I promised they could buy sweet cereal and stuff if we played the gig. They could buy something that they wouldn’t normally get for Christmas – we could buy what we wanted if we played. Those were some of the incentives, just to keep them going until the music would kick in.”

I wonder if the younger ones ever lost focus. Let’s face it, children at such a young age are very easily distracted...

“Remember, Regi was a child himself,” says Victor with a smile. Regi reiterates, “We were such a close family... I have to say, they never lost focus.” Joseph continues: “The other thing about it was that there wasn’t competition between the brothers, because we were just trying to keep up! Everybody was getting so good so fast that you didn’t wanna get left behind.

"You didn’t want to be the person who couldn’t play your part if the band wanted to play Return To Forever. You were inspired, but you also didn’t wanna get left behind, so you practise to be worthy of this thing that you know is special. Our mom made a good point of making sure there was no arrogance in it. We knew that we were something special. I wasn’t practising to be better than Victor or better than Regi – I was practising to be worthy.”

That last comment from Joseph is very inspiring – it’s an attitude that you don’t often get among musicians. Maybe you can only really get it in a family band scenario. Was there really no competition between the brothers?

“Music allowed me to be included in what my big brothers were doing,” Roy elaborates. “It’s so interesting. Art veers in a way that sports and competition can’t really go. Art is about you finding your voice, so when Vic says a sentence right here and I go to say something, I can’t compete with his voice because his voice is his voice.

“When you’re in music and everyone’s finding their own voice, then there’s a completion that’s happening. The orchestra is complete, man – the flutes are not competing with the horn section. Everyone’s completing this big thing, and you’re in it and it sounds good! You’re all on the same team.”

Joseph continues: “That’s the advantage that music has over competition. When you’re in competition you learn lessons beyond the game – hard work, focus, being accountable to other team-mates and that kind of thing – but the downside to competition is that somebody has to lose. That’s the part that’s not in music. You don’t play music for somebody to lose, you play music for the benefit of everybody – and that’s the advantage that musicians have.”

Victor explains: “Our dad was the same way. He was military so he knew about having to work together, but it was also a heavy racial time. Our parents being born in the 30s and us being born in the 50s and 60s, they knew what five black kids would potentially face. They wanted to make sure that we knew who we were, and that we supported each other in a world that might not support us back.

"We knew how special we were, and we were self-confident but, as special as we were, we were no more special than anyone else. That was very important for both of our parents. We grew up very, very confident, but it wasn’t us against anyone – it was all-inclusive."

Roy continues: “Regi would come home and tell us he had to sit in the corner facing the wall. We would ask him ‘What did you do?’ and he would say ‘I didn’t do anything!’ My Mom would hear about it and go talk to the teacher to find out why he’s sitting there when he hadn’t done anything. I feel for a lot of kids that don’t have their parents behind them, because you could get left behind.

"The teachers would show you things, but they weren’t teaching those things. Man, we would stay up way late with our mom and she’d be drilling us on these multiplication cards and teaching us to read and spell. That’s when I realised, ‘Man, the world will leave you behind’. I realised how special it was that our mom would stay up late after work so we wouldn’t get left behind in school.”

"Our influences go way further back than hours spent just playing music. That to me is just a small part. The big part is what my brothers are talking about right now. It’s how we think, how we thought about ourselves, how we were taught. Music just happened to be our vehicle.”

"But am I good? Absolutely. Confidence was instilled in us, to be the best version of yourself. Not only to be that, but to know you’re that. Everyone else has that potential too, and that our job is to help them – they might not see it in themselves.”

Roy explains: “People see us now and they say to our mom, ‘You must be so proud’ and all that, but when we were growing up we were the underdogs. That was a racial time, with everybody calling you names, with no respect for what you’re doing, who you are or what you hope to be.

"There’s something about being an underdog that gives you a little drive. It’s like David and Goliath – don’t underestimate the underdog! I just want to send that out to bass players. A lot of the time their parents don’t believe in them until they win an Oscar, but what you’re doing in art has meaning. You have to stick with what your vision calls you to do.”

I came away from meeting the Wootens truly impressed by their collective humility, as well as the support they give to one another. Every musician out there could learn a lot from them. Are you as supportive of your fellow bass players? It’s a question we should all consider.