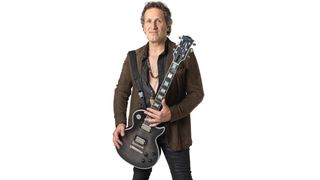 Vivian Campbell is one of the world's top-tier players who deals in effervescent shred while still knowing how to put a riff together, and it is only fitting that his signature guitar is pretty darn special.

The Vivian Campbell Les Paul Custom is based on a heavily modded LP that Campbell was playing with Def Leppard, but all roads have led him here. His first guitar was a Les Paul, and while he might have flirted with hot-rodded S-styles in the late '80s – like we all did – it wasn't long before he was back with the classic singlecut in hand.

With Def Leppard's box set, The Early Years 79-81, newly released and in record stores now, we got Campbell to tell us the story behind a unique Les Paul.

The genesis of the Vivian Campbell Les Paul

"My first guitar was a Les Paul, when I was 15. In the 80s I played Charvel/Jackson S-types, but came back full circle to Les Pauls just after joining Def Leppard in 1992. For a long time, Gibson wouldn’t even return my calls. Eventually I got a call from Philip Whorton who runs the Gibson Custom Shop in Nashville, asking if I’d be interested in working on a signature model. I said, ‘Absolutely!’ I’m really pleasedwith it. I had the first one at the end of our 2017 tour, and Gibson released it at the Vegas Consumer Electronics Show.

"We based the guitar on the bastardised Les Paul I was playing with Def Leppard at the time. It had a slim neck from a 1978 Les Paul Custom I’d bought in a Nashville pawn shop for $400, and this one’s very similar. All my Les Pauls have these jumbo Dunlop frets. I cannot bend with little skinny frets, they have to be big and wide. I bend aggressively in solos, and put a lot of vibrato on chords."

"The body is lightweight mahogany. I like light Les Pauls; I’ve had two back surgeries so I do need to be careful! And how’s this for a coincidence: I told Philip I wanted a dark, charcoal-like, translucent finish where you can see the wood grain. He came back with this colour called Antrim Basalt Burst, after the basalt rocks of the Giants Causeway on the North Antrim coast, and I was actually raised in County Antrim. That was a nice bit of serendipity…"

"In the mid-90s we were still using wedge monitors on stage, so the guitars were at a hefty volume and would feedback a lot. My guitar tech and I stole some DiMarzio HS-3 pickups off [Leppard co-guitarist] Phil Collen’s guitar tech and put one in the bridge position of my guitar! I got used to the tonality, so that’s what’s in the bridge here, with a DiMarzio Super Distortion in the neck."

"TonePros make really good, professional grade, tour-worthy hardware, and I’ve found over the years that I need that. My two heroes are Rory Gallagher and Gary Moore, who were both physical players with a really heavy right hand. In LA in the 80s there were all these great technical players who played like butterflies, barely touching the strings, whereas I was trying to kill the thing!

"I’ve learned over the years that you have to embrace your idiosyncrasies – your shortcomings sometimes define your style and make you unique. A fixed-bridge instrument fits my aggressive playing style."

"As on all my Les Pauls, the volume control for the bridge pickup is a speed knob, and the other three are top hats. Before in-ear monitors I’d have to shut off the volume with my right hand pinky on staccato parts, like the chorus of Pour Some Sugar On Me, to prevent feedback. I don’t need to do that any more, but I thought it was a nice, quirky touch. Somebody has since pointed out to me that Gary Moore did that too, I had no idea!"