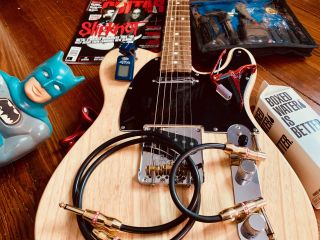 Whether you're taking your first step into performing or you’re a grizzled veteran of the live circuit, we're here to help. We'll begin by providing you with a checklist of everything you should bring to a gig — then we'll give you the essential dos and don'ts for when you're soundchecking and playing.

Talent aside, preparation is the real key to success — and your gear is a big part of that.

Guitar tools: Pack string cutters, pliers for tightening and Allen keys to tweak your action and vibrato system. All nonsense aside, this simple CruzTools/GrooveTech tool kit (pictured below) has saved many an ass at many a gig.

Spare guitar and strap: Tune it up before you go on. Your fans will escape to the bar if you hold things up changing a broken string mid-song.

Flashlight (or iPhone): It gets dark onstage; get an app for your phone and you won't have to worry about forgetting your flashlight.

Tuner: Never forget this. Get the best you can afford; there is no excuse for starting out of tune. I have a tuner built into my Line 6 M9 (the best thing ever), and I bring along two or three clip-onSnark tuners, since at least one of the batteries is always dead. In fact, I just bought a Snark Napoleon tuner, which — despite its odd name — is one of my favorite things in the universe. I can't wait till Snark releases the Franz Joseph I model!

Pen and paper: Have these on hand to jot down your setlist. Sure, you can use your iPad, but let’s get serious….

Amp backup: If you can't take a spare amp, try a modeller with cab simulator that can be DI'd straight into the PA. It's not ideal, but it's an option if another band on the bill can't help you out. I leave a super-light Fender Princeton DSP in the back of my car. It’s always there when something terrible happens with my main amp, a 35-watt tube job.

Batteries: You'll need spares if your power supply goes down. See the part about clip-on tuners above.

Electronic cleaning spray: A quick fix for crackling connections. Make sure it's in your gig bag.

Spare pedal: Get a budget spare for your essential pedal. For the super-prepared, a multi-effects unit could save you from serious pedalboard problems. See what I said about that Line 6 M9 above...

Earplugs: It might get loud, and these babies can increase the clarity of onstage levels.

Picks: Minimize the chances of losing one from sweaty mitts by packing picks with grippy surfaces. I always have about 41,447 more picks than I’ll ever need during a given night.

Extension cord reel with four three-prong power outlets: Never assume the venue has enough power points or extensions. It's worth investing in your own multi-socket extension adaptor that's RCD-equipped, with surge and overload protection. Yes, one more thing that lives in my car…

A cart of some sort: If you’re not the guy who sets up the gig, the venue might be a total surprise. In which case, it’s always nice to have a fold-up dolly or cart (or whatever you want to call it) to get your heavy tune amp from point A to point B with getting a blister before the show even starts.

Take the time to get to your band's sound right and then you can focus on the fun part!

DO: Learn the names of the sound engineers. Treat them with respect and thank them at the end of the night, even if they do treat you like an amoeba.

DO: Set your amplifiers to sensible volume levels onstage. Moderate levels allow the engineer to have more control over the overall front-of-house balance meaning that monitors don't need to be pushed to levels where they begin to feed back in order for singers to hear themselves.

DO: Turn your amp on at least a few minutes before you start; it lets your tubes warm up a bit.

DO: Tune all your guitars (even your backup) again as close to the start of your set as possible and make sure they're on hand and on stands. Things have a tendency to get knocked over in the heat of the moment.

DO: Choose a song for soundcheck that will test the sound mix in the best way for all instruments in your band.

DO: Listen carefully to the mix of instruments coming through the monitor speaker wedge. Can you hear yourself and the rhythm section clearly to keep time?

DO: Check as many of your sounds as you can: clean/crunch/distortion channels all need to be checked so they're at the right level. Ditto effects.

DO: Talk to the other bands you're playing with on the night and find out what backline will be shared. While it's common for a headline band to let support acts share drum shells and stands, it's not for breakables like amps.

DO: Be tuned-up and ready to take to the stage when the sound engineer needs you.

DON’T: Drink alcohol excessively before. It won't make you play any better!

DON’T: Assume you'll be able to share gear and turn up with minimal kit. It should be easy to get contact numbers or email addresses for the other acts on the bill from the promoter or the venue, and it's common courtesy to ask first.

DON’T: Crank your volume if your amp is being mic'd through the PA. You don't need a very loud onstage volume. Let the sound engineer get the levels. And you may not need your cab or combo front-on to the audience if it's being mic'd; angle it in a position that’s best for you.

DON’T: See soundcheck as a rehearsal or jam. One or two short songs should provide more than enough opportunity for the sound engineer to set up a decent mix. Taking liberties won't do you any favors with the other bands on the bill.

DON’T: Leave your pedals running with the input plugged in for long periods of time ahead of the gig if you're using 9-volt batteries with your effects pedals. It drains the power unnecessarily.

DON’T: Lose sight of the bigger picture. It's about attitude as well as the rig you're setting up. And remember that you get back what you put out. If you're confident, professional and polite, that's what you'll get back from the engineer and other bands.

There's more to impressing the crowd than your blazing chops!

DO: Take a drink onstage with you — especially if you're a singer. Unless you’re Paul McCartney, you may be surprised to find your throat can get as dry as the Mojave desert onstage, and you'll soon be begging for water. (Back to that McCartney reference: The guy is 77 years old, but he performs for hours at a stretch and never stops to drink anything. Next time you see him, pay attention...)

DO: Realize things can go wrong — it's just part of gigging. Have contingency plans in your head in case the worst happens, including an instrumental piece the rest of you can play to fill time if one of the musicians has a problem they need to sort.

DO: Look people in the eye while you're performing. Engaging with your audience is more than just about sound.

DO: Relax, listen to the sound engineer and remember that, ultimately, it's about the audience, not the band. Nobody cares that much about your tone except you, so stop stressing about it.

DON’T: Amplify your guitar when you're tuning up. You should tune quickly and silently between songs. Buy an electronic tuner with an easily visible display. The audience don't want to hear you tuning and it gives a sloppy, amateurish impression.

DON’T: Allow long silences between songs. While the guitarist or bassist tunes up, it gives the singer an ideal opportunity to crack a joke or, if they're not a natural raconteur, fill the silence by plugging the band's website or merchandise.

DON’T: Take forever to pack up your gear. Unless you're the headline act, the next band want to get onstage before the audience drifts away and loses interest. There will be plenty of time for excessive alcohol consumption and chatting up groupies once your equipment is off stage.

DON’T: Be sheepish with the audience. Forget apologetic amateurism and smack them right between the eyes with your set!