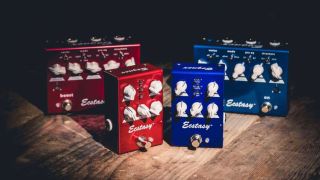 Bogner has unveiled mini versions of its Ecstasy Red and Blue pedals.

The smaller boxes do away with foot controllable boost and battery operation but come equipped with active tone controls, sweepable mid frequency range, Variac and pre-EQ switches, as well as a new gain mode selector for basic channel gain or boosted gain mode.

Features of the Ecstasy minis include:

The Ecstasy Red and Blue mini pedals are available beginning November 19 for $199 each. For more information, head over to Bogner.