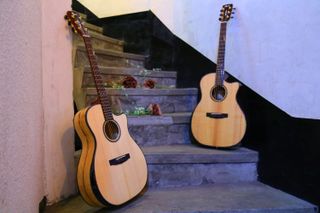 Cort has introduced the Bevel Cut Collection, a new series of acoustic guitars designed with an ergonomic beveled cutaway. The four models in the collection include two Grand Regal Bevel grand auditorium models, a dreadnought-sized Earth Bevel and an orchestra model Luce Bevel.

The two Grand Regal Bevel models are the GA-MY Bevel, which features myrtlewood arched back and sides, and the GA-PF Bevel, boasting pau ferro back and sides. Both models feature arched backs and L.R. Baggs preamps, as well as diecast gold tuners with black knobs, ebony bridge pins and an abalone rosette that corresponds to the top-rim binding.

The Earth Bevel and Luce Bevel feature mahogany back and sides, with diecast machine heads and a herringbone rosette.

For more information, head over to CortGuitars.com.