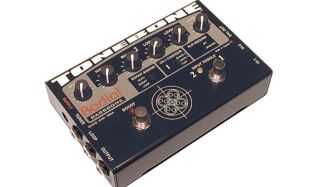 It seems we bassists are on an eternal quest for sonic nirvana, a journey that takes us through every part of our signal path. We spend hundreds of hours researching, testing and evaluating gear, exploring everything from the bass speakers in our cabinets to getting the best tone from our hands. If you’re a bass player who’s interested in exploring the possibilities of tone, you’ve probably already thought of adding a preamp to your setup. With so many models to choose from, though, what’s the best way to choose which one’s right for you?

A preamp is essentially a device that can increase the signal level, color the tone, lower the output impedance, convert the signal from unbalanced to balanced, or do any combination of the above. Each of these functions has its use, but an onboard preamp is a very different animal from a rack-mounted model. Making sense of the different preamp designs and functions will help you decide which preamp you need.

First, let’s examine the basic principle of preamplification. The output level of your bass is not high enough to run even a pair of earbuds, so your first priority is to have a preamp that can bump the signal up to a higher line level, the standard that most professional audio gear conforms to. Once you’ve brought your bass signal up to line level, it’s ready for the inputs of mixing consoles, soundcards, power amps and other devices.

If you have an onboard preamp installed directly in your bass, your instrument is considered to be 'active.' The evolution of active electronics began in the late 1960s, when Rick Turner and Ron Wickersham joined forces at Alembic. Their early work with two Bay Area rock bassists, Phil Lesh of the Grateful Dead and Jack Casady of Jefferson Airplane, paved the way for the now-ubiquitous active circuits found in today’s basses.

While some onboard preamps offer the ability to boost or cut various frequencies, others are boost-only. The amount of boost or cut is expressed in decibels (dB). The listed specs for an Aguilar OBP-3, for example, are ±18dB @ 40Hz for the low frequencies, ±16dB @ 400Hz or 800Hz for the mids (switchable) and ± 16dB @ 6.5kHz for the highs.

These numbers tell you that the preamp is tuned for deep lows, punchy (400Hz) or articulate (800Hz) mids and sparkling highs, and that you’ll be able to dial in substantial boosts or cuts (16dB is a lot). Comparing the specs on different preamps will give you a general idea of how different models perform, and it can help you avoid costly mistakes. Keep in mind that these boost and cut specs are for the EQ only, not the actual gain level from the preamp.

It’s important to know that an onboard preamp is not designed to drive a separate power amp. Sure, if you plug an active bass into a power amp, you will hear something, but the output level won’t be high enough to drive the amp to its full specifications - in a way, your bass preamp is really a pre-preamp (not an actual term, but you get the idea).

More on the floor

Preamps also come in stompbox form. Several companies make pedal versions of their onboard preamps; the Ken Smith P.A.P.A. (preamp/practice amp), for example, lets you use Smith’s active circuit with any bass. Other stompboxes are more character-based, like Tech 21’s SansAmp Bass Driver DI, which can simulate the tone of a bass amp, or the Radial Engineering Bassbone, which gives you two different EQ channels and multiple output options (including an XLR DI).

This mismatch results in less than optimal tone, which is why preamps such as the Fishman Platinum Bass are designed primarily to provide a buffer for piezo pickups - they alter your signal’s impedance level to match an electric bass amp’s input. In recent years, some amp manufacturers have adopted higher input impedances, making buffer preamps unnecessary.

Pedal-type preamps are versatile little buggers. They give you the performance of an active circuit without permanent installation, they’re an insurance policy in the event that your amp fails (in which case you can run into the PA), they give touring players a consistent starting point with varying backlines and they can help you quickly dial in the right tone in a recording situation. Many also feature an auxiliary input and headphone-out to make silent practicing more convenient.

Another common type of preamp is the rack-mounted unit, which most players use to drive a power amp in a live situation (many models come equipped for the studio, too). Several companies build rackmount models that are nearly identical to the preamp section of their popular amps - units like Eden’s WP100 Navigator allow you to get a brand’s signature tone while using a separate power amp or plugging directly into a studio console.

Other preamps, like the Demeter VTBP-201S, are designed to be more transparent. While not devoid of personality, devices like this strive to attain a more pristine response, letting the natural tone of the bass take center stage.

A rack-mounted preamp will have either tube input sections, solid-state input sections, or the ability to switch between the two. Tubes are sought after for their perceived warmth and natural-sounding overdrive, while solid-state circuitry is prized for its quick response, low harmonic distortion and accuracy. Although these general characteristics greatly influence many bassists’ buying decisions, keep in mind that the quality of the circuit design will have the most significant effect on the unit’s performance.

A well-equipped rack unit will have high- and low-gain inputs (or an input pad), which compensates for the different output levels of passive and active basses. The EQ section can vary from a graphic EQ, to a simple bass/mid/treble arrangement like the Demeter VTBP-201S, to several bands of sweepable mids like the Eden WP100 Navigator.

In addition to EQ, some manufacturers offer proprietary tone-coloration controls like the Aural Enhancer and Bass Intensifier circuits found on SWR’s Marcus Miller preamp. Other features you might find are a compressor, effect loop, crossover for bi-amping, mute switch and multiple outputs.

When it comes to interfacing with other devices, the output section is the most critical part of the preamp. To connect with a power amp, first you’ll need to know the power amp’s input requirements. Generally, for optimum performance, its input impedance should be at least 10 times higher than the preamp’s output impedance.

For studio use, make sure the preamp has a balanced line out, usually in the form of an XLR (mic-type) jack or sometimes a ¼" TRS (stereo) jack. Your bass produces an unbalanced signal that’s susceptible to hum and line noise, which is unacceptable for recording. A balanced line out will reduce the noise and conduct a clean signal to the mixing console or audio interface.

The right preamp can greatly improve your sound and provide useful features, but as you can see, there is more to picking the right tool for the job than simply buying the one your favorite player uses.