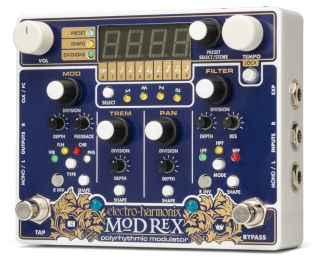 Electro-Harmonix has unveiled the new Mod Rex Polyrhythmic Modulator, a pedal that boasts four independent modulation engines that can be synched and subdivided to a master tempo for seemingly limitless polyrhythmic possibilities.

The pedal’s four independent modulation sections are MOD (vibrato, flanger, chorus and phaser), TREM (Tremolo), PAN (modulates between left and right in stereo) operation) and FILTER (offers a choice of low pass, high pass and band pass). Each engine can be used independently and assigned its own subdivisions of the beat, wave shape and effect parameters, or combined together to create new and unusual polyrhythmic sounds. Each section also features a choice of four LFO shape options—rising sawtooth, triangle, falling sawtooth and square wave.

Additionally, the Mod Rex's TEMPO control offers the user nine note-length choices for each of the four engines, and tempo is adjustable with the Tempo knob, Tap Tempo footswitch or via an expression pedal.

There’s also MIDI implementation, full stereo input and output and an external foot controller input, as well as capability to save and recall up to 100 user-generated presets.

For more information on the Mod Rex, check out the video below, or visit ehx.com.