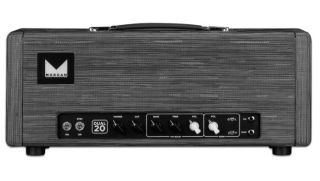 Morgan Amplification has announced the Dual 20 amp, which pairs two of the company’s designs—the AC20 Deluxe and the Abbey—together in one dual-channel head.

The Dual 20 boasts two EL84 tubes, three 12AX7’s, an EF86 and a GZ34 rectifier. Two independent channels, Normal and Top Boost, provide a range of tones, with the latter channel offering additional bass and treble knobs, as well as an extra gain stage.

Additional features include a Global Cut, which removes high frequencies from the power section, as well as a Power knob, which reduces the output level from 20 watts to a quarter of a watt while keeping tone intact.

For more information, head over to Morgan Amps.