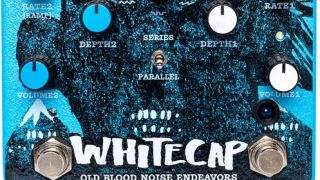 Old Blood Noise Endeavors has introduced its Whitecap tremolo pedal. The new pedal boasts a three-control analog tremolo and a multi-shape digital tap tremolo, and allows the user to combine the two sounds in series or parallel.

There’s also a “ramp” mode, which shifts the speed up or down by holding the tap footswitch, as well as relay bypass switching and standard 9VDC center negative power.

The Whitecap is available for $199.

For more information or to purchase head to Old Blood Noise.