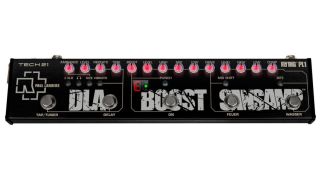 Landers has been a long-time Tech 21 user, in particular the SansAmp GT2 and SansAmp PSA, which is prominent in Rammstein’s worldwide smash, "Du Hast." When it came to creating the PL1, Landers told MusicRadar: “[I]t must have taken us a couple of years and about six or seven different models to come up with the final version, which is completely different to any of the other Fly Rigs.”

As for what makes the PL1 so unique, Landers continued: “There is a different engine inside it; in fact, there are two independent engines in there: one for the Feuer [dirty] sound and the other for the Wasser [clean] sound.

“The main [Feuer] sound is based on the SansAmp GT2, which I’ve used for a long time. I have this specific setting that I dial in and we wanted to build the same sound inside the PL1 so that I could use it for my main tone.

“The other channel [Wasser] is based on my Roland Jazz Chorus, which is what I use for my clean sound on the records, but this version has this extra bite switch which gives the clean sound that feeling of breaking up, too, especially when really start digging in. There’s also a compression switch, because I love the tone from compressed clean amps.”

Other PL1 features include a chromatic tuner, headphone capability, XLR output for direct recording and going direct to a P.A., illuminated controls, studio-grade metal footswitches and jacks and an included universal power supply. The unit is enclosed in a rugged, all-metal housing and weighs in at just over 20 oz.

For more information on the PL1 Signature Fly Rig, head over to Tech21nyc.com.