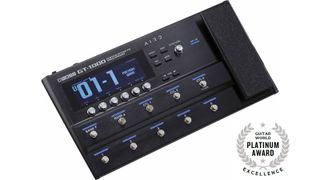 One of the best ways to keep up with guitar technology is by checking out the latest floor effects processors offered by Boss and Roland. Previous game-changing breakthroughs like COSM and V-Guitar made their debut this way, and Boss recently did the same with the GT-1000, which introduces AIRD (Augmented Impulse Response Dynamics) technology. There’s a very powerful processor and some highly advanced data crunching going on inside the GT-1000, but the most important thing for guitarists to know is that the unit provides the most responsive, dynamic, complex and nuanced sounds Boss has ever delivered as well as awesome, completely new tones.

FEATURES Unlike most previous digital modeling technology for guitarists, AIRD is less about painstakingly duplicating existing amps and speakers and more about delivering exciting new digital amps that take full advantage of the technology (while still being able to nail the tone of “real world” amps, if you so desire). 20 AIRD preamps with names like Natural, Boutique and Juggernaut provide the basic building blocks for pretty much any type of amp you can imagine, and various X-amps featuring MDP (Multi-Dimensional Processing) technology originally developed for Boss’ X-series pedals deliver additional tone-shaping complexity.

Beyond the amp/preamp building blocks, the GT-1000 features pretty much every effect a guitarist could ever want, from basic fuzz and overdrive to complex, synth-like textures. Various speaker cabinet models are also provided, and users can download third-party impulse responses. Numerous models of condenser and dynamic microphone models with adjustable distance from the axis and distance from the back allow users to replicate recording studio tones on stage.

The GT-1000 unit itself is slim, sleek and streamlined, but it has enough heft to stay firmly anchored on stage. The front panel is minimalistic, with 10 footswitches for selecting presets, banks and control functions; six buttons for accessing the menu, selecting effects, writing patches and selecting pages; a master output knob, and six user-assignable control knobs with parameters that vary depending on which page is displayed on the large monochromatic display. There’s also a built-in expression pedal and an EXP 1 SW indicator that illuminates when the expression pedal’s switch function is engaged.

The rear panel is generously appointed with connection jacks, including a standard guitar input, a pair of ¼-inch main outputs, headphone jack, two effects loops, XLR left and right sub outputs, two jacks for additional control switches or expression pedals, an amp control jack, USB and MIDI In and Out. The unit is powered with the included Roland PSB-1U adapter.

PERFORMANCE Like most contemporary digital modeling guitar products, the GT-1000 sounds best when connected to a full-range live performance sound system or a pair of studio monitors. If you prefer to use it with a guitar amp, the best route is to plug the guitar into the GT-1000’s input and plug to output(s) to the amp’s return jack, bypassing the amp’s preamp completely. The factory presets give a great overview of the GT-1000’s capabilities and expansive range, from shimmering, pristine clean tones to outrageously huge and complex distorted tones. They also show great potential for users who want to develop their own distinctive tones.

When it comes to effects, the GT-1000 provides the most complex capabilities of any Boss floor-mounted processor ever. The signal path can be configured in up to three parallel chains (called a “Divider”), which will split a signal into two paths. Any block can be placed in these parallel paths. Additionally, a “Divider” can be placed within Divided signal paths, which allows for up to four parallel paths, and depending on the effects placed in each of those paths some of them can even be stereo. And I can’t even tell you the maximum number of effects available for each path other than it’s more than enough. Suffice to say that the GT-1000’s effects and capabilities are a sound designer’s dream. A recent update provided three new overdrive/distortion effects, three master delay types and four AIRD preamps, and similar additions will likely follow in future updates.

Programming the GT-1000 can be a rather involved affair, but the large display makes it easy to navigate pages and adjust parameters. I particularly liked being able to reassign the six “quick access” controls for each patch. For example, I was able to change the Preamp 1 “treble” control to “middle” in only a few seconds. For those who like to get really deep into programming, Boss offers the free Boss Tone Studio app for editing via a desktop computer and USB or via Bluetooth with a mobile phone or tablet.

● 20 AIRD preamps provide a wide-range of tones and textures from pristine clean to dense distortion for crafting nearly any imaginable amp profile.

● The large display and six user-assignable knobs make it easy to program patches and quickly adjust parameters during live performances.

● Two effects loops are provided for integrating external pedals or rack processors with the GT-1000’s sounds.

● The Boss Tone Studio app for iOS or Android mobile devices allows users to program the GT-1000 via a wireless Bluetooth connection.

Whether you need a great variety of expressive tones for performing on stage or want to create entirely new signature sounds, the Boss GT-1000 delivers extremely powerful guitar tone and effects capabilities in a stage-worthy, portable, all-in-one rig package.