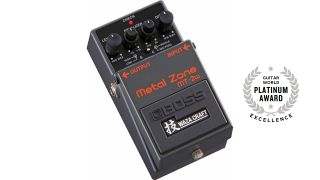 Now that Boss has released its seventh and eighth Waza Craft pedals, a definite pattern is starting to become evident. Every time Waza Craft reissues a faithful recreation of a long-discontinued and highly sought-after classic Boss compact pedal (like the CE-2, DM-2 and VB-2), they’ll also release a revamped, customized version of current popular product that is still in production (like the BD-2, SD-1 and TU-3), all with the extra pro features and expanded versatility that Waza Craft pedals are known for. For the latest batch of Waza Craft pedals, Boss is offering the DC-2w Dimension C for the classic category and the MT-2w Metal Zone for the popular best-seller division.

The extremes that these two pedals represent couldn’t be much wider. The original DC-2 Dimension C was only in production for four years and is known as one of the rarest pedals Boss ever produced, while the MT-2 Metal Zone has remained in constant production since 1991 and ranks as one of the top-ten best-selling Boss pedals of all-time. The DC-2 is also known for its crystal-clear chorus effects that sound particularly awesome with clean guitar tones, while the MT-2 delivers some of the heaviest distortion tones a Boss product has ever produced.

The new Waza Craft versions of these pedals absolutely nail the sounds of the original versions, but even guitarists who already own a DC-2 or MT-2 will be encouraged to double dip as the Waza Craft DC-2w and MT-2w’s additional new modes are worth the price of admission on their own merits alone. Waza Craft engineers have also improved the performance of the original effects by reducing noise and adding a premium buffer circuit, so even if you’re a purist these pedals are still worthy upgrades to your reliable favorites.

FEATURES In addition to the differences in production periods and tonal character, the MT-2w Metal Zone and DC-2w Dimension C also differ significantly when it comes to control features and ease of use. The DC-2w is extremely simple to operate, providing a total of four pushbuttons for accessing presets. Unlike the original DC-2, users can combine presets by engaging two pushbuttons at once to provide effects beyond the original unit’s selection of four. While the original DC-2 had mono input and output jacks, the DC-2w provides a pair of inputs and a pair of outputs for true stereo operation in addition to standard mono. The mode selector mini toggle switch provides a selection of Standard (original DC-2 Dimension C effects) or SDD-320 (Roland Dimension D studio rack effect) settings, the latter a favorite of Stevie Ray Vaughan who used the Dimension D often in the studio.

Representing the other side of the coin is the MT-2w, with its highly versatile EQ section. Like most distortion pedals, the MT-2w has Level (volume) and Distortion (gain) controls, but unlike distortion pedals that came before it, the MT-2w has a sophisticated EQ section with a stacked high/low control providing independent 15dB of boost/cut for high and low frequencies and a stacked midrange control with a selectable (parametric) midrange frequency peak from 200Hz to 5kHz and 15dB of boost/cut. The MT-2w’s S (standard) mode provides classic Metal Zone tones with its signature midrange personality, while the C (custom) mode produces more distinctly modern metal distortion tones with a wider overall frequency range, enhanced lower midrange and tighter bass.

PERFORMANCE While the MT-2w still requires very careful tweaking (and listening) to dial in its best tones (and there are a multitude lurking within for those with the patience and skills), its custom mode makes it much easier to find the sweet spots, particularly thanks to its much more natural, less-nasal sounding mids. Like the original, the pedal sounds best with the Level and Distortion knobs set to 12 o’clock or lower, and generally the most “metal” tones are produced by conservatively cutting midrange frequencies (no lower than 3 o’clock) between 800hz to 2kHz, slightly boosting the highs and boosting the lows more generously.

The DC-2w takes the incredible sounds of both the Dimension C pedal and Dimension D rack unit and boosts them into, well, a whole other dimension. These are some of the best chorus effects you’ll ever hear — thick, rich, swirly and mind-bending, particularly when taking full advantage of its stereo outputs.

THE BOTTOM LINE: Like with the previous Waza Craft pedals, Boss has taken some of its most popular and most coveted effects and made them even better, with the MT-2w now providing modern tones in addition to classic thrash sounds and the DC-2w delivering stellar Dimension C and Dimension D chorus effects