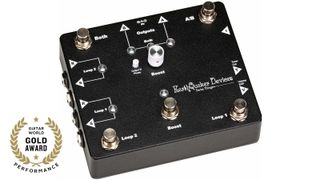 Considering the plethora of awesome stomp boxes available these days, most guitarists seem to be following the sage advice of the late, great Tom Petty when he sang, “too much ain’t enough.” The problem is that when you hook up all of those incredible pedals in a daisy chain, the tone that reaches your amp usually ends up sounding like an asthmatic mosquito.

Various companies offer sophisticated loop switching controllers, but in these cases too much is too much, especially for players who prefer to plug and play rather than ponder and program. Fortunately, EarthQuaker Devices has come to the rescue with the Swiss Things Pedalboard Reconciler, which performs an impressive variety of essential functions and makes it easy for guitarists to maximize the potential of their pedalboards.

FEATURES The best way to think of the EarthQuaker Swiss Things is as a central command center for a pedalboard-based rig. Its basic features consist of a pair of independent switchable loops, an ABY switcher for two-amp setups, a boost function that provides up to 20dB of clean boost, a buffered tuner output and an expression pedal jack for controlling volume level with an expression pedal.

Each one of these features is designed to deliver optimum sound quality. Both Loop 1 and 2, as well as the boost and both footswitches, use EarthQuaker’s Flexi-Switch relay-based true bypass switching that provides momentary and latch switching at the same time. Loop 1 is unbuffered and designed for pedals that work best with low impedance signals and interact with pickups (such as wah and vintage fuzz pedals). Loop 2 is buffered to provide optimum sound quality with digital effects like reverb and delay. The ABY function provides transformer-isolated outputs and a phase switch to prevent phase issues and ground loop noise. The boost section features a level control to adjust its output from 0 to 20dB.

PERFORMANCE Swiss Things is designed for placement at the upper righthand corner of a pedalboard, with the send and return jacks for both loops on the left, the outputs at the top and the jacks for the guitar input, tuner and expression pedal on the right. Setup could not be any simpler — it’s truly a plug-and-play device. Swiss Things completely eliminates “tone suck” by maintaining gain and the integrity of the signal output level at all stages of the game. It’s a surefire solution both for controlling loop/amp switching and boost functions and for fixing noise and signal-level problems that plague most pedalboard rigs.