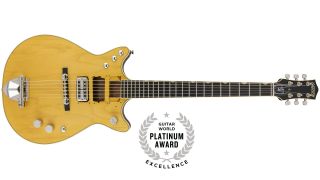 I’ve spent most of my adult life researching the finer details behind many different guitarists’ tones, and one of the biggest revelations of my efforts is that the simpler something seems, the more difficult it can be to duplicate. Case in point is Malcolm Young’s iconic 1963 G6131 Jet Firebird — the guitar responsible for the vast majority of AC/DC’s incredible rhythm guitar tracks. Malcolm’s Gretsch is as simple as can be, stripped down to almost the barest of essentials with just a single bridge pickup (at one point he experimented with having three pickups installed), several of the extraneous controls removed and even a bare wood finish.

These modifications may seem minor, but many guitarists like myself who located a vintage early Sixties Gretsch Jet Firebird or bought the Malcolm Young model Gretsch offered from 1995 until 2009 noticed something was missing (or actually maybe too much was there). While the past Gretsch Malcolm Young models were damn fine rock and roll battle axes, Gretsch has now gone the extra mile by offering a 100 percent accurate reproduction of Malcolm’s original Jet Firebird, the G6131-MY Malcolm Young Signature Jet, which nails every detail.

FEATURES The most notable feature of the Gretsch G6131-MY Malcolm Young Signature Jet is that it’s a dead ringer for Malcolm’s original “Beast” with the same empty pickup cavities, screw holes and chrome switch/control plugs. Unlike many replica models, it lacks painstakingly replicated battle scars from the 40-piece run of the 2017 Gretsch Custom Shop “Salute Jet” version, which is no longer available. The body is constructed with an early-Sixties-style chambered mahogany body with maple top that produces resonance similar to a semi-hollow guitar and reduces body weight. The empty pickup cavities even act like an acoustic guitar’s soundhole. The neck is also mahogany and features a U-shaped profile, 24.6-inch scale length and an ebony fretboard with Neo-Classic “thumbnail” inlays and 22 jumbo frets plus a zero fret.

The attention to detail paid to the hardware and electronics is equally impressive. The pickup is a TV Jones Power’Tron humbucker that replicates the growl and twang of an early Sixties Filter’Tron, and controls consist of a bridge pickup volume, master tone and master volume knobs. The Space Control roller bridge is period correct (reflecting Malcolm’s switch back to the original bridge after using a Badass replacement bridge for a few years), and the Jet Vibrato tailpiece is just like Malcolm’s, complete with the missing vibrato bar. Schaller die-cast tuners and G-Arrow control knobs complete the picture.

PERFORMANCE From the very first second I plugged the Malcolm Young Signature into a Friedman Dirty Shirley and struck an open A chord, I was greeted with the most satisfying “eureka!” moment of my tone-chasing career. This guitar nails the subtlest nuances of Malcolm’s tone like nothing else I’ve ever played before. The body’s weight feels exactly like that of an early Sixties Jet Firebird, and the unplugged acoustic resonance is lively and vivacious. Even though the guitar ships with more player-friendly .010-.046 strings than the heavier gauges Malcolm preferred, it still delivers his signature crunch and grind.

Malcolm fans aren’t the only players who should consider this ax. It offers outstanding playability and an alluring full-range voice that makes it an excellent option for playing a wide variety of styles, including country and blues. For recording hard rock rhythm tracks with plenty of balls and attitude, it’s nearly impossible to beat as it delivers an inherent aggressiveness that doesn’t need tons of tone-killing gain to generate satisfying snarl.

By painstakingly replicating every fine detail of Malcolm Young’s “Beast,” the Gretsch G6131-MY Malcolm Young Signature Jet nails Malcolm’s tone while also providing players with an outstanding instrument for developing their own sound.