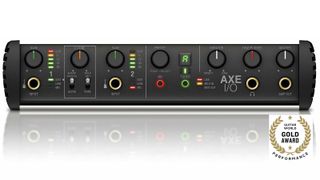 For most guitarists, choosing an I/O interface for a digital recording setup can be a daunting proposition. Hundreds of options are available, from pro audio-quality devices to the built-in I/O included as a feature of many guitar effects processors. The problem is that many of these items provide either too much or too little when it comes to delivering the features and capabilities many guitarists need. IK Multimedia recognized this dilemma, and they developed the Axe I/O to provide guitarists with an interface that provides them with exactly what they need to record guitar tracks with optimum sound quality and performance.

FEATURES The IK Multimedia Axe I/O is a two-input/five-output 24-bit/192kHz digital audio interface and controller that provides a good selection of standard I/O device features, including two ¼-inch guitar inputs, two combo ¼-inch/XLR mic/line inputs with phantom power, four ¼-inch line outputs, MIDI Out and In jacks, a USB 2.0 jack and a ¼-inch headphone output. But, more importantly for guitarists, it also provides numerous guitar-centric features one won’t find on other I/O units. Instrument input 1 also includes an adjustable control for IK’s Z Tone impedance adapting circuit, a switch for active or passive pickups and another switch that selects either the transparent preamp or a Class A JFET input buffer. These features allow guitarists to adjust how the instrument interacts with modeling software such as the included AmpliTube 4 Deluxe package and T-RackS effect plug-ins.

Other useful features include a built-in chromatic tuner, a high-current headphone output and a ¼-inch amp output that makes it easy to perform re-amping. Two external jacks allow users to control AmpliTube functions with a footswitch and/or expression pedal, and a Preset control enables the selection of AmpliTube presets directly from the Axe I/O. A license for Ableton Live 10 Lite is also included to provide users with a DAW right out of the box.

PERFORMANCE One of the most important features of any I/O device is its sound quality, and the Axe I/O more than exceeds expectations. The instrument inputs boast 117dB dynamic range and 3Hz-32kHz frequency response that far exceeds the typical 20Hz-20kHz range to provide incredible detail and dynamics that simply need to be heard to be believed. The Z Tone control is an outstanding tool for shaping a guitar’s tone, allowing users to change the load on their single-coil or humbucking pickups, which can change the pickups’ performance for fresh tonal options. The JFET input buffer enhances the harmonic depth of distorted tones, adding subtle analog warmth. The Amp output provides the easiest re-amping solution I’ve ever used — just connect it to an amp input and it provides a pristine instrument-level signal.

● The Z Tone impedance adapting circuit allows users to adjust the response of signals from single-coil or humbucking pickups for a wider tonal range from a single guitar.

● Users can select between a JFET input buffer for harmonically rich, warm tones or the unadulterated sounds of the transparent preamp.

The IK Multimedia Axe I/O makes it easy to record incredible guitar tones without an unlimited budget and an advanced recording engineer degree.