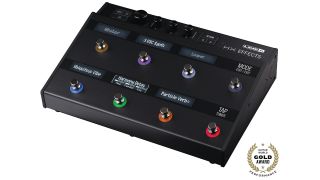 One of the greatest things about being a guitarist today is the incredible variety of choices we have for gear, particularly when it comes to effect pedals. By my count, there are currently 12,873 distortion pedals models on the market, although by the time this makes it to print there will probably be another 154 to add to the list. With all that choice, why would anyone want to limit themselves to using just a multieffects processor floor unit, especially when having so many unique pedals to choose from allow guitarists to customize truly distinctive signature tones?

The fact of the matter is: it costs a lot of money to put together a pedal board that comprehensively covers all the major “food” groups; especially if you’re using boutique effects. The ideal solution is a rig that combines multieffects with pedals — but floor units and pedals can seem like two entirely different beasts. Fortunately, Line 6 has designed a compact multieffects floor unit called HX Effects, that fits on a pedalboard amongst various other stomp boxes. It can even can perform like a pedalboard unto itself; while also providing a vast selection of stellar effects that makes it a great choice for players who want to use the unit on its own, or even to control an entire rig.

FEATURES Like its name suggests, HX Effects is focused completely on effects processing. It’s packed with Line 6’s acclaimed Helix effects and powered by the same audio engine; but there are no amp, speaker cabinet, or mic models to confuse or complicate your tone creation process and performances. More than 100 (Helix) effect models are provided, including 77 beloved and updated “legacy” effects from previous Line 6 products. Models are arranged in 10 groups: distortion, dynamics, EQ, modulation, delay, reverb, pitch/synth, filter, wah, and volume/pan. Up to nine “blocks” (which separately can be an effect, volume pedal, looper, or impulse response) can be used simultaneously, and the order of effects in the signal chain can also be modified. And if that isn’t enough, the HX Effects also has amp-switching capabilities.

PERFORMANCE HX Effects admirably represents the quantum leap multieffect floor processors have taken from their “generic” personalities of the not-so-distant past. Most of these effects will be familiar to guitarists and some even date back to the earliest POD days, but all of the effects sound much better — with improved dynamics, detail and depth resulting from Line 6’s highly advanced Helix technology. HX Effects offers everything from the most primitive germanium transistor fuzz boxes to complex digital processing — most sounding as good as the genuine items and a few sounding even better. Unlike the flat, one-dimensional sounding models of yesteryear, these effects are so responsive and expressive that you may be tempted to leave your stomp boxes at home.

Line 6 put considerable thought and consideration into making the effects editing process as convenient and easy as possible. Effects are selected for editing by pressing or touching the corresponding footswitch, then three parameters appear in the LCD “scribble strip” that can be adjusted with the three parameter editing knobs. Even cooler is the ability to display all available parameters for a selected effect at once, by touching the footswitch for about a second. This causes the remaining parameters in groups of three to “spill over” to the other scribble strips, so you can see where each parameter is set and access them instantly.

Most multieffect units treat their “stomp box” modes as an afterthought, but with HX Effects it’s a priority. This is great if you prefer to treat the unit as an addition to an existing pedalboard, with various individual effects available on demand, instead of as a controller for multieffect patches.

• Provides more than 100 distortion, dynamics, EQ, modulation, delay, reverb, pitch/synth, filter, wah, and volume/pan effects, up to nine of which can be used simultaneously.

• LCD “scribble strips” above six of the eight footswitches depict effect block names and make it easy to adjust parameters for each effect or even view all of an effect’s parameters at once.

• THE BOTTOM LINE HX Effects is ideal for guitarists who love Line 6’s stellar Helix effects but want something with a smaller footprint that can operate with the ease of a traditional stomp box pedalboard.