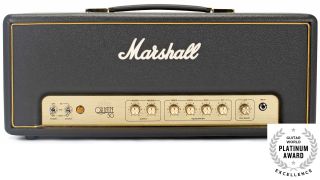 While I truly love multi-channel guitar amps for the undeniable versatility they can provide when performing live, I often wonder if we guitarists were actually better off when we didn’t have such a wide variety of tones, all easily accessible simply at the flick of a footswitch. For example, when I think of the greatest guitar tones of all time, most examples come from players who used single-channel Marshall heads during the Sixties, Seventies and Eighties. Even the great Marshall tones that emerged during the Nineties and new millennium often came from players who used older or reissue single-channel amp heads.

Marshall’s new Origin series guitar amps provide a welcome return to the philosophy of less is more. The Marshall Origin50H amp head is kind of like a long-lost brother of a Seventies JMP 50-watt head, providing a single-channel design and a dead-simple control panel. Marshall did manage to add a few modern and highly welcome conveniences like variable power output, a boost function and effects loop, but at its heart the Origin50H is all about providing the most beloved classic Marshall tone in its most pure and unadulterated form. Even better, Marshall Origin amps are affordably priced, making genuine classic Marshall tone more accessible than ever.

FEATURES The Marshall Origin50H is a single-channel, all-tube 50-watt amp head featuring a pair of EL34 tubes for the power amp section and three ECC83 tubes for the preamp and effects loop. The front panel controls are arranged in three sections, with Presence and Master in the Output section, treble, middle, bass and tilt in the EQ section, and a gain control with pull boost function in the final section. Next to the power on/off toggle switch is a three-position toggle switch with low (1-watt), mid (10-watt) and high output (50-watt) settings. The amp provides only a single ¼-inch guitar input jack, but the tilt control provides the classic voices of bright and normal input channels as well as the blend of both that players would get by using a jumper cable between the two on a four-input amp.

Rear panel features include an effects loop with ¼-inch send and return jacks, a jack for the included footswitch that engages the boost function and effects loop, a ¼-inch DI output, and three speaker output jacks for connecting 8- or 16-ohm speaker cabinets or a pair of 16-ohm cabs. The shell’s dimensions are a little shorter than those of a classic Marshall “smallbox” head, and the overall weight is about 26 pounds, which is very welcome for players who are tired of lugging big, heavy heads to gigs.

PERFORMANCE Like the classic Marshall JMP amps of the Seventies, the Origin50H excels at overdriven tones that are raw, organic and vibrant with a certain midrange character that can only be described as “Marshall.” If you love the tones of Jimi, Jimmy, Billy, Eddie or Angus, the Origin50H can get you pretty damn close. This is not a high-gain amp by any means, although engaging the boost function can provide suitable compression and saturation for smooth, sustaining solos. The clean headroom is actually quite generous and impressive, which is welcome news for fans of signature Marshall clean tones as well as players looking for a solid foundation for a pedal-centric rig.

The 1-, 10- and 50-watt output settings provide dramatic differences in output level, with the 1-watt setting being about the level of loud talking while the 50-watt setting is more than loud enough for use on stage. The amp sounds best with the Master control set from 8 to 10, and with my mid-Sixties SG I nailed “Highway to Hell” tones with the EQ set to 6, 6, 6 …hmm.

The classic Marshall overdrive and clean tones that guitarists know and love have never been more affordable or accessible, thanks to the Origin50H