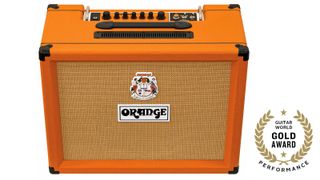 I love multi-channel amps that produce a multitude of tones as much as anyone, but personally my most soul-stirring moments of tonal revelation have almost always come from Fifties or Sixties amps with features that most players would consider primitive. Orange’s new TremLord 30 combo is designed for players with similar tastes, who prefer one great tone over dozens of good ones. Orange calls the TremLord 30 “our very British take on the Fifties amplifier,” but it’s much more than that, offering several features like reverb, tremolo with two footswitchable speed settings, a “bedroom” low-wattage switch and effects loop that weren’t around before Elvis discovered amphetamines.

FEATURES The Orange TremLord 30 is a 30-watt all-tube combo with a single 12-inch speaker specially designed by Italy’s Lavoce company to provide maximum clean headroom and smoother treble response. The circuit includes four EL84 power output tubes, three 12AX7 tubes for the preamp and tremolo and two 12AT7 tubes for the buffered effects loop and reverb. Controls consist of volume, bass, treble, tremolo speed 1, tremolo speed 2, tremolo depth and reverb knobs. Inside the cabinet is a switch for selecting all four or two power output tubes. Used in conjunction with the front panel’s headroom/bedroom switch, this can provide 30 or 15 watts in the headroom setting or 2-or 1-watt output in the bedroom setting. The two tremolo speed settings, tremolo on/off and reverb on/off, can be controlled with an optional footswitch(es). The post-tremolo effects loop is fully buffered and compatible with everything from stomp boxes to pro rack units.

PERFORMANCE Providing impressive clean headroom and producing only a moderate amount of overdrive at full output, the TremLord 30 delivers a truly distinctive, individual voice reminiscent of the British character of classic Watkins and early Hiwatt amps but with its own personality. The bass control provides surprising range, from ballsy, beefy body at max to crisp, cutting clarity at the minimum setting. I tried it with a wide range of guitars and the amp paired exceptionally well with each, enhancing the guitar’s inherent character while giving it sort of a British accent. The tremolo and reverb effects are simple but highly musical, retaining the guitar tone’s full body while delivering highly musical textures that don’t get lost in the mix with a band. The TremLord 30 sounds awesome on its own, but it’s also a great choice if you’re looking for a clean platform for a pedal-based rig.

● The tremolo effect provides two separate speed settings that users can toggle between with an optional footswitch.

● The two/four output tube and headroom/bedroom switches allow guitarists to set the amp for 30, 20, 2 or 1 watt/watts of output.

● THE BOTTOM LINE The Orange TremLord 30 may have a very simple, classic-inspired design, but it’s hard to beat if you’re looking for an amp with highly distinctive tone unlike anything else on the market with full body, rich harmonics and expressive depth.