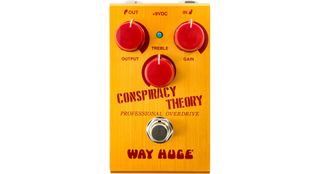 By the time you read this, the planned raid, Storm Area 51, They Can’t Stop All of Us - which gained traction on Facebook - will have become a somewhat serious movement to break into the top-secret U.S. base in the southern Nevada desert. Over a million Americans - responding online - expressed interest in participating in this mock event to end all speculation on what extraterrestrial forms of life the government has been hiding from us for all these years.

What will they find!?! The many U.F.O.s we’ve marveled at in photos?! Aliens in all shapes and sizes stacked 10 bodies high?! Oooh, the thought alone makes the aluminum foil wrapped around my head spin! Well, for now, I’m going to put my X-Files proclivities aside and concentrate on my conspiracy theories, namely, a new one I’ve uncovered known as the Way Huge Smalls Conspiracy Theory Professional Overdrive pedal. And between you and me, it’s so good, and so transparent in its naturally overdriven crunch, we need to keep this one under wraps, got it?

Once again, my independent sources reveal that the CTPO is yet another type of 'Klones' overdrive, and this time around, I’m willing to admit it’s pretty darn close. It unashamedly comes in a copper-orange housing with red control knobs, and its reduced size is small enough to be concealed on your person and will never be confused for the real thing. With controls for Output, Treble and Gain, it’s a no-brainer to use, and can be powered by a single 9-volt battery or AC adapter.

The facts prove there is no cover-up here - the CTPO is a full-bodied and rich overdrive imbued with a smoother mid-harmonic complexity unlike other K-clone pedals. The CTPO acts more like a cranked, low-wattage Fender amplifier with singing sustain, and it really nails that. Its range of gain is dialed-in for fat and bluesy, ideal for the touch-sensitive hunters, and pairs incredibly well with other overdrives and distortions.

Diming the Gain knob calls up thick overtones that segue into otherworldly feedback as you turn up your guitar’s volume. It’s less of a conspiracy and more of an overdrive that’ll bring you back down to Earth  but I’m still gonna need you to file this under 'Highly Classified.'