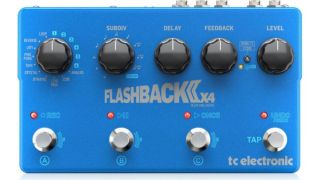 TC Electronic has updated its popular Flashback 2 x4 Delay with a wealth of new and cool features. First up is the addition of three pressure-sensitive MASH footswitches, which allow the user to toggle instantly between delay sounds for real-time modification. Each footswitch holds a delay preset and the ability to control three parameters at once by varying foot pressure on the switch.

And like the original 2 x4, the new iteration comes decked out with a Subdivision knob with 11 tempo settings, dedicated tap tempo switch, analog-dry-through to maintain integrity of analog dry signal path when delay is on, 40-second looper and expression pedal and MIDI inputs, among other features.

For more information on the Flashback 2 x4 Delay, head to TC Electronic.