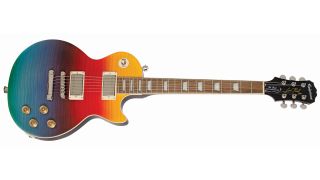 The BOSS GT-1000 is a premium amp and effects processor for guitarists. Designed for superior tone and exceptional musical response; the GT-1000 is the first-ever guitar multi-effects processor with 32-bit AD/DA, 32-bit floating-point processing and 96 kHz sampling rate throughout. The GT-1000 is driven by BOSS’s latest custom DSP engine and filled with cutting-edge BOSS technologies in a compact and lightweight floor-based unit. The GT-1000 offers intuitive editing and powerful control with a large, bright stage-ready display, 10 assignable footswitches and an onboard expression pedal with toe switch. Via built-in Bluetooth, users can edit and organize GT-1000 sounds wirelessly using dedicated apps for iOS and Android devices.

The BOSS WL series is a new line of high-quality plug-and-play wireless systems for guitar, bass and other electronic instruments. Equipped with lightning-fast wireless technology, the WL series delivers superb audio performance with ultra-low latency and rock-solid stability. The WL series offers exceptional sound quality with nearly effortless setup. Ultra-compact and affordable, the WL-20 Wireless System is as simple to use as a standard guitar cable. A small transmitter plugs into the instrument and a matching receiver plugs into a pedal or amp. The receiver includes cable tone simulation, which reproduces the natural capacitive effect of a 10-foot guitar cable. With its stompbox-size footprint, the WL-50 Wireless System is ideally suited for pedalboards and features an integrated transmitter dock, plus two cable tone simulation options.

The MXR EVH 5150 Chorus is based on a legendary chorus unit that Eddie Van Halen used to add texture and dimension to some of his most classic recordings from the early Eighties. It has a simple three-knob setup — Volume, Tone, and Intensity — with Input and Output Level pad switches, mono and stereo outputs, and an internal true/buffered Bypass switch for modern rig flexibility.

The Martin 000RSG is a new Road Series model with a Sitka spruce top and siris back and sides. The 000RSG acoustic is a solid wood Auditorium version of the DRSG, and is a great sounding guitar at an affordable price. New features to this model are white binding and a multi-strip top inlay, which give it a unique look in the series. Like the DRSG, it has a Richlite fingerboard and bridge, gloss body, hand-rubbed neck finish and Fishman Sonitone electronics.

Fender’s brand-new Player Series lineup of electric guitars and basses (formerly the Standard Series) features some of the company’s most-iconic models — such as the Player Stratocaster, Player Jaguar and Jazzmaster, Player Telecaster, Player Jazz and Precision bass and many others.

The Albert Hammond Jr. Stratocaster celebrates the unique sound and iconic style of the Strokes guitarist — with some unique design twists. Based on a 1985 reissue of a ’72 Strat, the guitar replicates Hammond’s customized pickup switching. Pickup switch position four activates the neck and bridge pickups in tandem, while positions one and three are reversed from the traditional layout. Hammond’s signature graces the back of the large Seventies-style headstock, while other Seventies-inspired features include bullet truss rod nut, three-bolt “F”-stamped neck plate with period-correct Micro-Tilt adjustment and a Seventies-era logo. The ceramic single-coil Stratocaster pickups are custom-designed to match Hammond’s brash, visceral playing style.

The D’Addario Accessories Auto Lock guitar strap is designed to work with most standard electric guitar and bass strap buttons on the market. Simply slide the strap end over the guitar strap buttons, and the strap is locked in. The grey clamp is spring-loaded, so it automatically clamps down on the strap button and will not release until you unlock it. Just push up on the grey latch, slide the end off and the strap is removed. The strap has been successfully pulled/tested to 180 pounds. The Auto Lock strap is made of soft nylon material and is adjustable from 30” to 55.”

The Electro-Harmonix Oceans 11 is a compact reverb pedal, with advanced functionality, that features 11 reverb styles ranging from essential to exotic. The Oceans 11’s Mode button allows the user to select up to three variations of many of its reverbs, for greater versatility. The pedal also features powerful, yet intuitive “hidden” parameters, accessible thru its Secondary Knob Mode, that enable the player to take greater control of its effects. An internal Tails switch provides a choice of whether the reverb effect fades out naturally, or stops immediately when the pedal is switched to bypass. In most settings, the pedal is also capable of producing infinite reverb that can be played over with a fresh reverb effect, complete with adjustable parameters.

The NU-X Mighty Lite Bluetooth Mini Modeling amplifier is a portable, desktop amp with three channels, built-in digital reverb and delay. It also offers an Auxiliary line-in and Bluetooth connectivity, built-in drums (with nine different styles) and a metronome. For further capability, the Mighty Lite App for iOS and Android can be used to edit parameters.

The Vox Mini Superbeetle is a smaller, modernized replica of the AC100 amp heads and matching 4x12 cabinets used by the Beatles. The Mini Superbeetle comes complete with its distinctive chrome stand and retro-chic look, yet is powered by Korg’s NuTube technology, and a unique analog design that recreates Vox’s famous AC sound. The Mini Superbeetle provides a maximum output of 50W when paired with a 4-ohm cabinet, and features an open-backed speaker cabinet equipped with a single 10-inch Celestion speaker. This all-new amp also includes on-board reverb, as well as a NuTube powered tremolo circuit that provides a pulsing Sixties-style effect.

Taylor Guitars’ revolutionary new V-Class bracing is now available across all series, with the release of new 300 Series and 400 Series Grand Auditorium models. V-Class bracing is a groundbreaking, award-winning innovation in acoustic sound that responds with greater musicality and harmonic agreement. By introducing a more orderly vibration to the guitar’s top, V-Class bolsters the volume and sustain to offer players a more dynamic voice to explore while also resolving the minor intonation issues players have long had to contend with. The tonal improvements of V-Class provide a purer platform of sound that magnifies the tonal characteristics of each different wood pairing, allowing for a more distinct version of each wood’s sonic flavor. The new V-Class 300 and 400 Series models also feature inlay updates, including the addition of a peghead inlay to help identify them as V-Class guitars.

A Summer NAMM Best in Show award-winner, Jammy is a new, super-portable digital guitar claiming the industry's best playability-to-portability ratio. Jammy's 15 standard-sized frets are suitable to play the vast majority of your favorite rock songs, and since it fits into most backpacks and complies with airline carry-on regulations, traveling with the guitar is a breeze. With a detachable neck, Jammy is ultra-portable, and only 17" long. It has two direct audio outputs—1/8" and 1/4"—allowing for headphone use, or plugging into an amp. The sound is not only generated but also processed onboard, and guitar effects can be applied without the need of using the Jammy mobile app. The app, however, opens up the Jammy's capabilities, allowing guitarists to play along to a metronome, switch the type of guitar, change the tuning, configure the FX chain to achieve a desired sound, and much more.