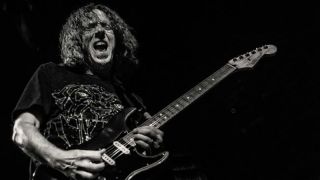 The gear Ty Tabor used to create his highly coveted tones on the first four King’s X albums — particularly the amp that was the source of his richly distorted yet surprisingly crisp and clearly defined rhythm sounds — was one of guitardom’s best-kept secrets until early 1996 when Tabor finally revealed the details. For years, guitarists guessed that Tabor played through an expensive custom or heavily modified tube amp, but actually he was using a long-discontinued solid-state Lab Series amp that was — and still is — an inexpensive bargain on the used market. The rest of Tabor’s rig was similarly modest, including budget Alesis Midiverb II and Ibanez DD200 rack effects and his beloved Fender Elite Stratocaster — a darkhorse ax from the last days of CBS’s ownership of Fender.

Tabor’s Lab Series L5 amp (removed from its combo chassis and mounted in a head-only configuration) and Elite Stratocaster have unusual features that collectively shaped his distinctive midrange sound. The L5 amp provides a variable midrange peak frequency that is adjustable from 100Hz to 6.4kHz, midrange boost/cut and a multifilter that also tweaks frequency response. The Elite Stratocaster has built-in active electronics that consist of TBX treble expander and MBX midrange booster circuits featuring a preamp that provides up to 12dB of gain. Tabor combined these unusual features to dial in pronounced upper midrange with a resonant, nasal-like quality and brilliant attack.

On “Out of the Silent Planet,” Tabor’s tone is predominantly the Elite Strat and L5 amp with the guitar’s controls all maxed. On other early King’s X songs, he’d generate clean tones just by backing down the Strat’s master volume, and he would use an Ibanez DD200 dual delay and Alesis Midiverb II’s chorus effect for solos and some rhythm parts. While Tabor never felt that the L5 gave him the bass he wanted, fortunately bassist Doug Pinnick more than capably covered the low end. For “Out of the Silent Planet,” Pinnick played a Hamer 12-string bass that blended perfectly with Tabor’s guitar to create an absolutely massive rhythm guitar sound.

TONE TIP: While Tabor’s original gear is already cheap enough on the used market, these suggestions will get you 90 percent of the way there without scouring want ads. Use the Spider Jam’s Blues Green (Vox AC30) amp setting along with the Beano Boost in the treble boost (switch center position) setting to emphasize those crucial upper midrange frequencies.