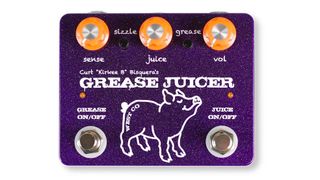 West Co has announced the Grease Juicer, a new fuzz/envelope filter inspired by Curt Bisquera, a session drummer who has worked with Mick Jagger, Tom Petty and the Heartbreakers, Johnny Cash and others.

The new pedal runs the fuzz in front of the envelope filter, and can also be used solely for the latter effect. The detector and audio circuits are specifically tweaked for bass (green knob and LED version) or guitar (orange knob and LED version). Controls on the unit are “Sense” (sensitivity) “Sizzle” (gate) “Juice” (resonance) Volume and “Grease” (gain).

The Grease Juicer is available now for $329.

For more info, head on over to WestCoPedals.com.