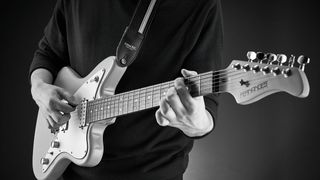 “I’ve heard of slash chords, but what are they?”

It’s a simple idea – they’re chords whose lowest note isn’t the root. The root note in, say, an A chord would be A; in a G chord it would be G, i.e., the root is the note the chord gets its name from. Easy! It’s the same for any kind of chord – Am, Amaj7, A13 or any other kind of ‘A chord’ all have A root notes. Now, to come back to slash chords – if you played an A chord, but with a different note in the bass, then that would be a slash chord. Get it?

“I think so, but I don’t really understand why it’s important.”

Well, it’s important in that it’s a whole other category of chords you can use in creative ways.

“Got it. Can you give me some well-known examples of slash chords?”

Sure! Jimi Hendrix’s Little Wing is a masterclass in slash chords – in fact, much of Jimi’s rhythm style uses them. Van Halen’s Running With The Devil is crammed full of slash chords. For a '90s take on proceedings, have a listen to Reef’s Place Your Hands.

“How do I get started with slash chords?”

Take a look at the gallery below where we’re looking at a handful of shapes and covering some essential basics.

Ditch the low G and the chord becomes G/B – because B is the lowest note.

Another easy open chord. Surely you know this one!

Here we’re adding a G note in the bass. Hence you get Am/G.

Well, we’ve shown you the easiest way to understand slash chords – just use any note other than the root in the bass. As you say – simple! There are potentially limitless possibilities, though. Just think how many ‘slash notes’ you could apply to the chords you already know. And every time you learn a new chord, you could be making up even more slash chords – just add or take away a bass note.

“How do I go about using these shapes in some music?”

Take a look at our tab examples below where you’ll find a mix of typical shapes played in a more musical context. The first example is based in the open position so the chords are easy beginner-friendly shapes.

“How shall I tackle the second example?”

Hopefully it’s not too tough to play. For now though, play through the tab slowly and see if you can identify the bass notes. None of the bass notes are root notes of their respective chords – which means they’re slash chords.

G/B and D/F# are the slash chords here. The idea is that these chords offer a step by step move from C to Am and from G to Em.

Higher up the neck