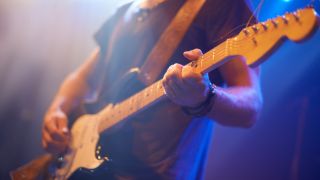 Pedal tones? So this is about stomp boxes?

Pedal tones is actually a reference to the pedals found on organs - like those you see in churches. The organist would step on these pedals to produce a long, sustained ‘pedal’ tone - usually low in pitch - to provide a deep full sound to accompany the notes played on the ‘regular’ part of the organ by the player’s hands.

Okay, I guess. What’s it got to do with guitar playing?

Fair enough, where can I hear them in action?

We’re glad you asked! You can hear it in old-school 80s riffs like Bon Jovi’s Raise Your Hands and Van Halen’s Man On A Mission. If you want to hear an advanced version of a pedal tone riff , the driving bass riff heard on Muse’s Hysteria changes between multiple pedal notes.

I’m ready for action, where do I start?

Example 1 is a classic metal style riff that shows how you can use the palm-muted fifth string as a pedal note against two-string powerchords played on the middle two strings. The low A note drives the riff along, while the powerchords provide the contrast.

Try out these six chords over a sixth string pedal tone. And, remember, it doesn’t have to be metal! With a bit of creativity, these ideas can work in rock, indie or any electric guitar style really.

That was easy enough, how else can I use them?

They can also be used on higher strings as riffs or even in solos. Just check out the solo on Red Hot Chili Peppers’ Suck My Kiss. Example 2 uses the open first string as the pedal tone while quickly moving around the neck. You can hear guitar legend Angus Young use this kind of idea in the AC/DC classic Thunderstruck.

So far so good. Is there anything else I can work on?

Plenty, as it happens. We’ve shown you some basic riffs to get started, but there’s lots you can do to modify our two examples. Experiment with changing the order of the chords or notes between the pedal tones. Alternatively, change the number of times you play the pedal tones between the chords. Once you’re done with that, we’ve provided you with some more shapes so you can make up your own riffs.

Make sure you mute the fifth string a little, but play the powerchords un-muted - this will stop the pedal note blending with the chords.

Playing on one string

As soon as you’ve played each fretted note, release pressure on the string and start moving to the next fret - this will help you play the riff at full speed.