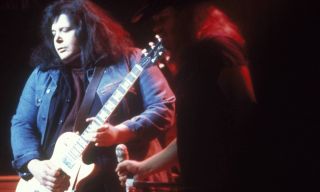 Though rarely mentioned in the pantheon of great rock guitarists, Mountain’s Leslie West is unquestionably one of the most influential and original players to emerge from the burgeoning late-Sixties rock scene.

West, a native New Yorker, first gained national exposure at the age of 21 via his scorching cover of Otis Redding’s Respect, released in 1966 while a member of the Vagrants.

The band’s producer, Felix Pappalardi, began producing Cream in 1967 (starting with Disraeli Gears) and in 1969 joined forces with West on the guitarist’s breakthrough solo debut, Mountain, which includes the seminal classics, Blood of the Sun, Long Red, Baby I’m Down and the immortal masterpiece, Dreams of Milk and Honey.

Their alliance soon adopted the moniker Mountain as the group’s name, and the classic lineup of West, Pappalardi on bass, drummer Corky Laing and keyboardist Steve Knight were described by Rolling Stone as “a louder version of Cream.” The group’s fourth show ever was in front of 400,000 people at Woodstock on August 16, 1969. The band achieved worldwide success on the release of their breakthrough smash single, Mississippi Queen, in March 1970.

Like most blues and rock players, the majority of his improvisations are based on pentatonic scales, and, akin to his influences Albert, B.B. and Freddie King, as well as Eric Clapton and Jimi Hendrix, West often alternates freely between parallel minor and major pentatonic phrases in his improvised solos.

FIGURE 1 illustrates the E minor pentatonic scale (E G A B D) played in a highly useful extended pattern that begins with the open low E string and moves diagonally up and across the neck. FIGURE 2 shows E major pentatonic (E F# G# B C#) played in a similarly diagonal pattern. Be sure to memorize both shapes, and then try transposing them to different keys and areas of the fretboard.

FIGURE 3 is a 12-bar solo played in Leslie’s style. In bar 1 into the first half of bar 2, the lines are based on E major pentatonic, starting with an oblique bend on the top two strings. On beat two of bar 2, I bring a high G note into the phrase, alluding to E minor pentatonic and stick with this scale through the end of bar 6. In bars 7–9, I utilize notes from both scales, leaning a little more heavily on the E major pentatonic sound, then close out the last three bars with lines firmly based on E minor pentatonic.

When studying this solo, notice the attention paid to melodic phrasing, and strive for proper bend intonation and to produce a wide, even vocal-like vibrato, all essential elements in replicating West’s trademark guitar voice.