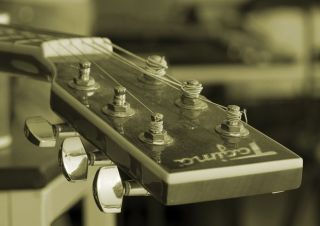 Changing electric or acoustic guitar strings isn't a complicated task, but try convincing a new guitarist of that. It can seem plenty intimidating to a beginner.

Some players are so unnerved at the thought of restringing their guitar that they never learn to do it and rely instead on the local guitar shop to do it for them. Some players are simply too lazy to change their strings, while others don't even realize that strings need to be changed!

While old guitars improve with age, old strings typically do not. As guitar strings age, tone and intonation are negatively affected by a build up of dirt, sweat, dead skin, and oils found naturally in the fingers. Strings start to sound dull, become difficult to play, and are prone to breakage. A fresh set of strings will remedy this. New strings have a brighter tone. They stay in tune better and are easier on the fingers.

When to change your strings

So how often should you change your strings? Well, the answer varies from guitarist to guitarist. A professional who plays every day will probably change their strings every three or four gigs. Guitarists who sweat a lot, or play in smoky clubs, or spend hours a day playing, especially playing aggressively, will need to change their strings more often than a player who doesn't.

If you leave your guitar out of the case, even things like humidity and exposure will eat away at the strings and necessitate more frequent changes.

On the other hand, someone who plays less frequently may be able to go longer between string changes, especially if they regularly clean the grease and dirt from their strings after playing.

How to choose the best acoustic guitar strings

If you don't play much at all these days, if your guitar has been hidden away in the back of your closet for years, your strings are immune, right? Wrong. Yeah, they really need to be changed. Strings oxidize over time - a fairly short time.

Some signs that a restringing is in order would be if you start to have a harder time than usual getting the guitar in tune (although this isn't always indicative of old strings. Tuning issues could also point to problems with the instrument itself.)

More obvious signs that it's time for a string change are rusty and discolored strings or a lackluster sound. You also might want to change strings if you have an important gig coming up and don't want to chance a break, or if you can't remember the last time you changed your strings.

The first step for replacing strings is to learn about the different types of strings available and how to choose the best ones for you. This can sometimes take experimentation, patience and a few bucks. Try various brands of strings. You'll be surprised at the difference in feel, sound and string-life.

Get your gauge right

Strings are sold both individually and in sets; they are available in a variety of gauges. String gauge refers to the thickness of the guitar string, which is measured in thousandths of an inch. The larger the gauge, the heavier the string. When describing gauges, guitarists typically omit the decimal and refer only to the number. For instance, a string gauge of .008 would be called an 8.

The lighter the string gauge, the easier it is to bend the string. The lightest-gauged strings are easier to press down, but are much harder to keep in tune and tend to have a thinner tone. Lighter gauges are easier to play but they are more prone to breakage and can cause more fretboard buzzing when neck action is low.

Keep your guitar in shape

What you will need to change your strings with is a set of replacement strings. If you've never changed guitar strings before, you might want to pick up a few packs, just in case. You'll also need a wire cutter, needle-nose pliers, a tuner and a soft cloth to clean those hard-to-reach places that you'll have access to with the strings removed. A string winder is recommended as it will make changing strings much easier, but one isn't required to get the job done.

Now, opinions on how to remove strings varies. Some guitarists recommend you change strings one at a time so that the tension exerted on the neck doesn't fluctuate too much, while others say to change all the strings at once. The necks on today's guitars are able to withstand a lot of pressure, much more than the absence of all the guitar strings might cause. You might feel more comfortable changing one string at a time initially until you get the hang of it.

If you do take all the strings off at once, use this opportunity to do an all-out 'tune up' of the guitar. Oil in your fingers leaves a residue that builds up on your fretboard over time. Clean the frets with an old toothbrush, some guitar cleaning oil and a rag to ensure a longer life for your fretboard.

If you have an acoustic-electric whose battery is housed inside the body of the guitar, use this time to change it if you can. Nothing's worse than having to find a way to squeeze your hand between the strings to replace a dead battery.

You might also use this time to polish the guitar face. There are a few places on the guitar that are just too hard to reach when the strings are on. Now is your chance to give the guitar a good shine without having to lift up the strings or work around them.

Once you change all the strings, you might have a problem keeping them in tune. The way to remedy this is to stretch the strings once you've installed them. Do this by pulling the string from the point at about the end of the neck. Give each string a pretty good tug before tuning, then do it again after tuning.

Yes, it'll put the whole guitar out of tune again, so re-tune after stretching the strings and then start the whole tugging process over again. Repeat this process until you tug and the strings don't go out of tune, usually four to six times.

Now that you've got a fresh set of strings on your guitar, prolong and protect their life with products like string cleaner and conditioner. As we've already noted, a string's worst enemy is finger oil, which is unfortunately what you apply every time you play your guitar.

The best way to combat this is to keep a spare rag or old t-shirt in your guitar case and once you're finished playing, wipe the guitar strings up and down the neck every single time you play. This will help add a little more life to the strings.

And there you have it! Hear the difference? Now there's no excuse for stale sounding, rusty strings.