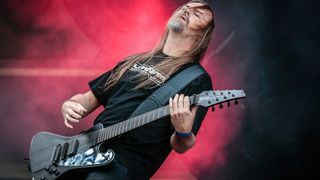 The diminished scale is an interesting sound that provides a different sonic experience to the more typical modes.

Its symmetrical nature lends itself to fusion music like that of Allan Holdsworth and progressive metal players such as Fredrik Thordendal and Jeff Loomis.

The latter two use the scale as a more ethereal alternative to Aeolian mode when playing over single-note riffs. The scale is sometimes called whole-half scale, or octatonic scale.

Whole-half is a useful name as it spells out the construction of intervals; start from any root note and go up a whole tone, then a semitone, then a whole tone and a semitone. If you keep going up, you will play eight different notes before you reach the octave.

The ‘double flat 7’ interval looks and sounds the same as a Major 6th, meaning those interval names are ‘enharmonic equivalents’. You can think of it as a Major 6th if it helps you visualise the shape, but in the context of diminished chords, that interval should theoretically be referred to as a ‘bb7’.

The symmetrical construction of the scale also translates into symmetrical chord shapes. As you can see in Example 1 we are playing the A Diminished scale along the fourth string and harmonising each note using b5-bb7- b3 from low to high.

As you ascend the scale you will notice that each chord is exactly the same shape; as opposed to the Aeolian, Harmonic Minor, or Melodic Minor modes which have a mixture of Major, Minor, Augmented and Diminished sounds.

There are various other Diminished 7th chord shapes to be found within this scale, so in Example 2, we have a five position ‘CAGED’ system to help you cover the entire fretboard with roots on each string. Every one of those notes fits within the A Diminished scale.

Example 3 demonstrates how you can find the Major triads F, B, G# and D, within the A Diminished scale. By using root position shapes as well as first inversions of those same triads, we can create a smooth sequence of chords. Example 5 uses the same logic, but expanded into sweep-picked arpeggio shapes.

Example 4 is a legato scale run which is phrased as four notes at a time. As a useful visualisation tool you can see that the first four notes are the same as our more typical Minor modes, Aeolian and Dorian.

First plot the scale along the fourth string with your first finger. Start at A on the 7th fret and ascend in tones and semitones until you get to the A octave at the 19th fret. For the chord shapes use your first, third, second and fourth fingers from low to high.

Here are five diminished chord shapes based around the CAGED system structure. The four notes of each chord are A-C-Eb-Gb (1-b3-b5-b7).

See if you can name the notes and intervals of each shape as you play them. Note that the fourth shape does not contain a Gb as there is no practical way to include it.

Keep your third finger on the fourth string throughout and alternate between the two shapes as you ascend.

Use your first finger to play A on the 5th fret, then hammer on with your third and fourth fingers before moving up to the fifth string, 5th fret.

Now pause for a moment and add some vibrato (finger, or whammy bar). Next move up a semitone to Eb and play the same thing again. Repeat this pattern on all the strings.

Start with fourth finger at the 8th fret and descend the F Major arpeggio, then move up to 8th fret with second finger and ascend the B arpeggio.

Once you have these two shapes under your fingers you can ascend the fretboard by alternating between them. You can either use sweep or alternate picking for this lick.