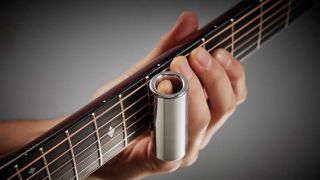 Whether you love the sound of slide  but don’t know where to begin, or you want to take your playing to the next level, this lesson is for you, as we’re analyzing the playing styles of eight celebrated exponents of the art, from the Sixties onward: George Harrison, Ry Cooder, Bonnie Raitt, Sonny Landreth, Rory Gallagher, Jeff Beck and Derek Trucks.

Mind you, this is a look at modern blues-rock slide, so it doesn’t feature early, legendary pioneers like Robert Johnson or Elmore James, who obviously influenced them all.

One thing all of the eight players whose styles will be covered in this lesson have in common is their preference for using a glass slide, which is de rigueur for playing electric slide guitar, whereas a metal slide generally sounds best on acoustic.

There are, of course, exceptions: George Thorogood uses a roughly textured copper slide, fashioned from a piece of plumber’s pipe, which gives him his signature raspy tone. A slide can also be worn on various fingers, each of which presents technical advantages and disadvantages, so experiment to find out which finger works best for you.

Also, slides are made in varying sizes, thicknesses and weights, so try out different ones to see which feels most comfortable and works best for the way you play. Additionally, various materials are available, in addition to glass, such as brass, chrome steel, copper and ceramic, so investigate those options too.

Current page: How to play slide like the world's greatest players