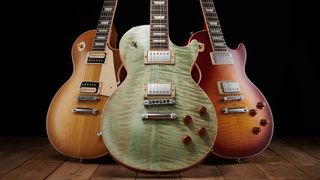 Gibson’s Les Paul remains the Nashville company’s most iconic electric guitar. Who better than master luthier Jim DeCola to tell us how to set one up to perfection? His step-by-step advice holds good for many other classic Gibsons, too.

“First off, fit a fresh set of strings,” Jim DeCola advises. “If you’re doing any kind of setup and you’re going to really dial it in, you need fresh strings. Older strings can often have tiny kinks and wear spots and so you won’t get true intonation and playability out of them. So that’s key.”

“Second, check and, if necessary, adjust your neck relief,” Jim continues. “The simple way to do this is to fit a capo at the 1st fret to hold down all the strings there, then hold down the strings where the neck joins the body, then inspect the gap between the top of the fret and the bottom of the strings at about the 8th fret.

“If the neck has a concave bow [namely, curving slightly upwards away from the body, as it normally would be], you’ll see a slight gap between the top of the fret and the string being held down. If the neck has a convex bow, however, you won’t have a gap. So then you’ll need to loosen the [truss rod].

“As long as the amount of relief measured at the 8th fret is between the thickness of a sheet of paper and a business card, you’re in the right ballpark,” Jim explains. “If that gap is too tight then you’re going to have buzzing towards the nut and the open position for the first few frets. And if there’s too much relief then you’ll have buzzing as you play up the neck, from around the 12th fret onwards.”

“Once your neck is adjusted, look at the action at the nut,” Jim explains. “I’m not suggesting you should modify the height of the nut yourself but you should check it, in case work needs to be done.

“Once you’ve checked the nut height at the 1st fret, it’s time to check the action at the 12th fret,” Jim says. “On electrics, our official spec is 3/64ths of an inch. In other words, that’s the gap we’re looking for between the 12th fret and the bottom of the high E string. Then on the low E string, we’re looking for a gap of 5/64ths of an inch from the top of the fret to the bottom of the low E string.

“Once you have those two sets of specs, you adjust your bridge [height] accordingly and that dials in your action. Of course, those are our factory specs and your taste may vary. You can adjust lower, for example, if you have lighter touch or play heavier strings – they don’t tend to buzz as much as lighter-gauge strings do.”

“Starting with the neck pickup, you hold the high E string down at the highest fret and then measure the distance from the bottom of the high E string to the top of the pickup polepiece – and then do the same with the low E string. Our official spec is 4/64th of an inch. Then repeat the same procedure for the bridge pickup, except here we adjust the bridge to 3/64ths of an inch.

“Years ago, standard string sets would feature a wound G with a relatively thin core,” Jim says. “So your G was a lot weaker sounding than the B string and then the B string, being thicker than E, would overpower that. So, generally, pickup polepieces on the B string were set lower than the other strings.

“Today it’s not quite that critical. Our factory spec, when we make the pickups, they’re pretty flat with the top of the cover, or the top of the bobbin if they’re open pickups. And, again, that will perform fine.

“But if you want you can adjust them to conform to the radius of the fingerboard, which for Gibson is a 12-inch radius. I suggest, in that instance, leaving both the E strings polepieces flush with the pickup and then raising them in for the B, G, D and A to provide that radius, as measured with a ruler or a radius gauge.”

“Another thing you can do is adjust the height of the stopbar tailpiece,” Jim says. “Some people like to adjust the stopbar all the way down the body, which will give the greatest possible break angle across the bridge. That will increase the angle from the bridge and provide a slightly stiffer feel to the strings – some people say sustain, too, but that’s a subtle thing.

“You could raise the bar up and that’ll reduce the string angle and make it feel a little bit slinkier. As long as it still has a positive break angle: you don’t want it so loose that the strings fall out of the saddles.

“Some people also like to insert the strings back-to-front, so they wrap over the stopbar tailpiece, and Duane Allman was a big proponent of that. Doing that allows you to adjust the tailpiece all the way down to the body, but it reduces the resulting string break angle because of the strings wrapping around and leaving from the top of the stopbar. So a lot of players are very passionate about that. But, again, there’s no right or wrong.”