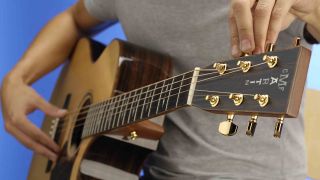 Left your tuner pedal at home? No spare batteries for your clip-on? Never fear! In this lesson, you'll learn two methods of tuning your electric or acoustic guitar using just your ears.

Even if you happen to have your tuner on hand, learning these - the 5th interval and unison/natural harmonic methods - is great ear training exercise, and will make you more in tune (see what we did there?) with the slight differences in pitch that can mean the difference between sounding professional or sloppy.

This method involves playing fifth intervals, which are basically power chords. So, tune your A string to your low E string by playing the B note at the second fret and strumming it and the open E together. That gives you an E5 power chord.

It's easy to hear when fifths are out of tune, because a fifth is a perfect interval. If you think you're out of tune, tune lower than you need to, then scoop up from below.

If you're scooping up from below, pick near the bridge - with a good amount of force - and try to tune quickly, before the notes die out. Adjust until it sounds like the perfect power chord, with no sonic dissonance or turbulence.

Now, tune your D string off of your A string. Play your open A, and the E note at the second fret. Together, that gives you an A5 power chord.

Likewise, to tune the G string off the D string, play the open D and the A note on the second fret of the G string. This gives you a D5 power chord.

To tune the B string off of the G, you have to go to the third fret on the B, because of how the guitar is asymmetrically tuned. Play the open G and the D note on the B string, which gives you a G5 power chord.

Finally, to tune the high E string off of the B, you play the F# note on the E string and the open B, giving you a B5 power chord.

Get all those power chords lined up, and your guitar should be in tune!

To tune using unisons, you want to get your reference pitch - your low E - either from an electronic tuner, piano keyboard, pitch pipe or tuning fork. This method is especially convenient, because you don't have to reach over with your right hand.

Start by playing a natural harmonic at the fifth fret on the low E string. To do that, make sure your finger is lightly touching the string directly over the fifth fret, not behind it.

Normally, when you fret a note, you put your hand in that little box between the frets, or "behind" them. When you play a natural harmonic, you touch the string ever so slightly, but you touch it directly - using any finger you want - over the actual fret-wire itself.

It's easier to hear if you're in tune with harmonics, because they're higher-pitched, and they're each a pure tone. Fretted notes and open strings both have other notes occurring in the background.

Listen for a pulsating sound when you play the notes. The further apart the two notes are, the faster the pulsating, the closer they get to being in tune, the slower it gets. Eventually, the sound will flatline, which is what you want.

This same method doesn't work when you're tuning your G string to your B string, because of the way in which the guitar is tuned. An alternative method is to play the 7th fret harmonic on the low E string, and then pick the open B string. That gives you a unison!

Finally, to tune the high E string off the B, go back to the 5th fret and 7th fret harmonics. Play the harmonic on the B string's 5th fret - directly above the fret, lightly touching it and then quickly letting go - and the E string's 7th fret.

Be sure to check the strings again, because - with the changes of tension in the neck - they can drift out of tune once again.