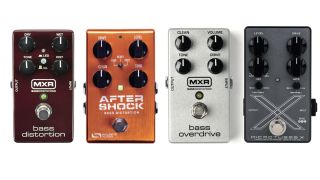 Hello all – I’m back with the second instalment of my pedalboard column! I hope part one last month on equalizer pedals has been useful. This time we’re looking at ‘drives,' or to be more specific, distortions, fuzzes and overdrives for bass.

In brief, it’s driving a source signal into an audio circuit and then upping the gain until the circuit design can no longer reproduce an accurate version of the signal going in. With too much gain, the waveform becomes clipped and we get that identifiable saturated sound.

We often hear about ‘clipping’ in amplifiers, which in most situations is considered neither desirable or pleasant-sounding. However, in drive circuits, distorting the signal in a controlled manner has turned into an art form – and today there’s a mind-blowing array of pedals on the market.

What types of drive are there?

Early overdrives were designed for guitarists and were essentially boost pedals intended to push the first valves in an amplifier into distorting more. These also worked brilliantly as a standalone effect, pushing up the midrange and adding grit to a bass sound. Modern bass-specific overdrives help to maintain low-end.

To use one effectively, dial some overdrive into a sterile bass tone and it will breathe life into it – but try just a light rasp to begin with. Some of the greatest recorded bass tones intentionally sound as if they’re only just clipping, probably because a valve amplifier of the time was being played hard for a bit of extra warmth in the mix.

These circuit designs result in a more aggressive saturation and sustain, requiring careful shaping of the tone. When more saturation is required, the very thing you don’t want too much of going into the circuit is – bass end! Too much will make the sound stodgy and incoherent, so pedal designers factor in a pre-equalization circuit that attenuates the lows prior to saturation.

This can sound pretty rubbish in a bass guitar pedal alone, despite the tight-sounding saturation, because we still need that low-end back. One solution is to use the humble Blend control. Depending on which pedal you’re playing through, this knob allows the mixing of the driven sound with a clean version of your tone, complete with low-end frequencies intact.

Here the saturation is harsher, obliterating the instrument’s character more than the softer harmonic clipping of the other two types. I like to use fuzz in tandem with an analogue octave pedal and an envelope filter to create some old-school synth-bass sounds, as the fuzz limits transients on high settings.

Look out for gated fuzz, where the circuit design will chop off any note sustain, which is great for mimicking synths. Function bands, take note.

What do all those knobs do?

Other than the blend we’ve mentioned already, a typical drive pedal will include some form of equalization. This could be a rudimentary tone knob, much like that on a passive bass, or up to several bands of active equalization that can boost or cut individual frequencies.

Some bass drives also offer a pre-equalzsation selection to tailor exactly how much of the low or high frequencies get pushed into the saturation circuit, so the bass end could be less saturated than the high frequencies if you prefer. The Output control allows you to balance the signal against the pedal being disengaged.

I’ve also seen many examples of boutique drive pedals with some form of switch that selects different circuit components. Different diodes, for example, offer alternative drive characteristics – and often you will see silicon, germanium or LED types mentioned in the manufacturer’s blurb.

I like to use band-pass distortion that only affects the midrange frequencies of my bass. The blend I choose gives me the warmth of distortion, plus the clarity of clean, low-end punch without losing the top-end attack. No fizziness, either!