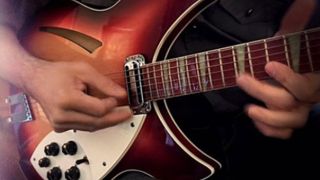 When first learning to solo over 7th chords, most guitarists will begin by checking out the pentatonic and blues scales we all know and love, followed by the Mixolydain mode, which completes the fundamental trifecta for blowing on unaltered dominant chords.

But what about altered dominant chords?

When adding in b9s, #9s, b5s and #5s, all the “altered” notes of a 7th chord, suddenly these three scales just don’t cut it on the bandstand.

Knowing that you need to bring new melodic vocabulary into your playing to be able to solo over 7alt chords is the first step, but with so many options to choose from, such as the whole-tone scale, half-whole diminished scale and others, where do you begin?

In this article, we’ll explore three different ways you can solo over 7alt chords: the Altered Scale, fifth mode of Harmonic Minor and triad pairs. All three concepts sit nicely on the guitar, sound great over 7alt chords and can create a solid foundation for you to build up from when improvising over 7alt chords.

The first concept we’ll look at is the seventh mode of the Melodic Minor Scale, otherwise known as the Altered Scale. This scale is one of the most common ways to solo over 7alt chords, and it’s a great place to start when first digging into exploring altered chords in a soloing context.

The reason this scale works so well over a 7alt chord is that it contains the root, 3rd and b7th, as well as all of the possible “altered” notes of the chord, the b9, #9, b5 and #5.

Here are the intervals of an Altered Scale:

Here is one of my favorite Altered Scale licks in the style of Wes Montgomery and Pat Martino. Again, try it out in all 12 keys. Then bring it to an improvisational exercise in the practice room over a one-chord vamp, progression and full tune.

The fifth mode of the Harmonic Minor Scale is also a great choice when soloing over 7alt chords. Here, you have a few less alterations than the Altered Scale, the b9 and b13 only, which gives you a more focused and specific altered sound compared to the seventh mode of the Melodic Minor Scale.

Here are the intervals of the fifth mode of Harmonic Minor:

Once you have this scale down, and have improvised with it over a vamp, progression and tune, try putting on a one-chord 7alt vamp and alternate between this scale and the Altered Scale.

This will allow your ears to begin to recognize the similarities and differences between the two scales, and allow them to flow more organically in your playing.

This lick comes from the Bebop and is a great way to bring the fifth mode of Harmonic Minor to your 7alt chords.

Notice the big leap between the B and Ab in bar one. It’s tricky to get under your fingers at first, but once you get it down, this idea of jumping up an octave to the next note in the scale is a powerful technique that you can use to build energy in your solos.

The last idea we’ll explore is the concept of using triad pairs over a 7alt chord. To do this, you simply find the b5 and #5 notes of the scale and play major triads from those notes.

For G7alt, you would use the Db and Eb triads:

Notice that these notes spell out six of the seven notes of the Altered Scale. Using triads to organize your scale work is a great way to use scale-based ideas, without sounding like you’re running up and down scales in your lines.

Try this idea out in the practice room. Then when you’re ready, put on a 7alt vamp and alternate between all three concepts in this article to get a sense of how each one can be used to outline a 7alt sound, while maintaining a distinct melodic flavor at the same time.

This lick uses triad pairs over a G7alt chord. Notice how you can spread these triads out to cover a large range, with this line covering over two octaves.

I also like this rhythmic grouping when playing triads. It allows you to put focus on the first of each three-note grouping, while at the same time using the last two notes to drive the line forward and build energy in your phrases.

Learning to solo over Altered chords is an essential skill for any jazz guitarist to have in their tool belt. Though it may seem like a tough task at first, by checking out the Altered Scale, Fifth Mode of Harmonic Minor and Triad Pairs, you can build a large vocabulary of ideas that will make navigating 7alt chords more manageable and enjoyable.

Do you have a favorite way to solo over 7alt chords? Please share it in the comment box below!