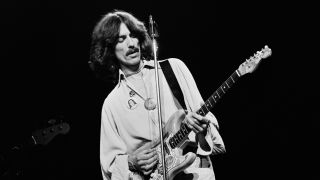 George Harrison had not played much (or any) slide with the Beatles, but on 1970’s All Things Must Pass his slide playing appeared, fully formed, on many tracks, including one of his biggest hits, My Sweet Lord.

This melodic slide approach would go on to become part of his signature sound and would be refined throughout his career. Using standard tuning enabled Harrison to switch back to rhythm during verses, and playing extended passages on one or two strings gave him a unique, instantly recognizable and often-imitated slide voice.

Harrison seemed to avoid the typical blues slide cliches, but his slide playing was nonetheless soulful; instead he’d create unique melodies, usually on his psychedelic “Rocky” Strat - or any Strat, for that matter - with a variety of pickup selections, through a Fender amp.

Some compression will help get George’s signature sustain; however, he wasn’t in love with reverb, preferring his guitar to sound naked. As always, higher action and thicker strings make slide playing easier.

FIGURE 1: This example is a short melodic phrase that requires careful intonation when moving a semitone and shows how Harrison would play a melody across one or two strings. The first three notes all result from one strike of the string.

Be sure to place the slide directly over the fret indicated, not behind it (to the left of it, if playing a right-handed guitar). And consider using the fingers of either hand to mute the unplayed strings, to keep them from ringing and sounding unwanted notes in the background.

FIGURE 2: This example has more movement and shows how Harrison would alternate between long, legato notes and more staccato passages, using the full length of the neck.

FIGURE 3: Harrison’s slides were occasionally very wide, so, again, strive for accurate intonation by positioning the slide directly over the fret indicated for each note. Bar 4 also changes direction in the slide without re-picking.

Though not indicated, try to add a subtle vibrato to any held note by loosely wiggling the slide about the distance of one fret to the left and right of the note. This technique will take some practice to perfect and requires a light, relaxed touch.