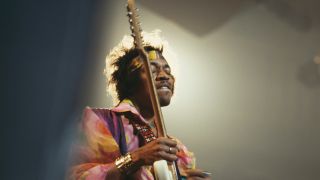 The E7#9 has become synonymous with Jimi Hendrix because he used the chord so effectively, especially in songs like Purple Haze.

The construction of the chord is a dominant 7th with an added #9 interval. The #9 is essentially a b3rd only an octave up, so there is an inherent major versus minor tension within the chord, which makes soloing over it an interesting prospect. This chord also appears frequently in jazz and fusion music so we can look to those players for direction, too.

The first example shows the parent scale of the E7#9. Superlocrian, otherwise known as Diminished Whole-Tone scale, is the 7th mode of Melodic Minor. The intervals of the scale are 1-b2-b3-b4-b5-b6-b7, so everything is flat. If we swap some of those ‘flat’ interval names for ‘sharp’ interval names we can spell out the same scale like this: 1-b9-#9-3-b5-#5-b7.

Here we can see there is a Dominant 7th chord (1-3-b7) with the remaining notes being ‘altered’ extensions (b9-#9-b5-#5). Using this jazz terminology we can therefore call E7#9 an altered dominant.

Our second example is a lick based in Minor Pentatonic with an added major 3rd. This is the most straight-ahead blues sound and the closest to what would be played over a regular dominant chord in a blues context. The interplay between the minor and major 3rd is the key to this approach.

Example 4 is a scale line reminiscent of something Mike Stern might play. This lick is a constant stream of 16th notes which weave their way through the Superlocrian scale, starting and finishing on E. Until now, we have been using the E7#9 as a static chord over which we can use different scales, but Example 5 uses the chord in a functioning dominant scenario. This means that the E dominant chord resolves to a chord a 4th higher or a 5th lower.

Play through each of the examples along with the backing tracks and, once you can play them note for note, try expanding on them with your own phrasing ideas and use the concepts here to create your own licks.

This is the first position shape for E Superlocrian. Start with your first finger on the 12th fret, sixth string and play up and down the shape in even eighth notes.

This lick is based in E Minor Pentatonic (E-G-A-B-D) with an added major 3rd (G#). This is the most straight ahead sound for a typical blues soloing approach.

For a more outside sound, go from the #9 interval and play Minor Pentatonic. In this case the #9 is G, so you can play your G blues vocabulary here.

This lick is based in position 4 of E Superlocrian with the root on the fifth string. Play this stream of 16th notes as smoothly and evenly as possible. Use alternate picking throughout for the most consistent timing and attack.

Here we are using an A Minor Pentatonic shape for the Bm7b5 chord and essentially flattening the root note for the E7#9 chord (The A note becomes G#). Placing this different note on the downbeat of the new chord in a progression is a great way of spelling out the changes.