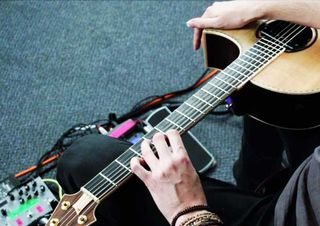 I’d like to address a technique that is colloquially known as “lap tapping,” wherein the guitar is laid flat across one’s lap and notes are sounded by pressing down on the strings with both hands, akin to how one would play the piano.

I stumbled across this technique as a teenager, when I discovered that my mother had accidentally knocked over my Les Paul, snapping off the headstock. While the headstock was being glued back on, the guitar was left lying on its back on the dining room table.

At the time, I was studying the music of people like Pierre Bensusan and had recently discovered DADGAD tuning. Confronted with the guitar laying on its back, my conception of the instrument changed completely: instead of visualizing “box” chord shapes, it seemed more like six pianos in a row, in that each string was like its own keyboard.

I found that I could create major and minor chords just by tapping down on the strings with my fret hand, as shown in FIGURE 1. When tapping chords like these, I like to anchor the thumb to the side of the neck, for added stability.

After a while, I started to develop the technique further by adding melodic passages with my pick hand, which we will get to in a moment. For now, I’d like you to practice FIGURE 2, wherein G, A and Bm chords are sounded repeatedly with just the fret hand, as described. Play this over and over until it becomes second nature.

In regard to melodic sounds created with the pick hand, I started with natural harmonics (N.H.). FIGURE 3 illustrates a practice pattern wherein each note is sounded by lightly touching the given string above the 12th fret with the index finger while simultaneously picking the string with the middle finger.

FIGURE 4 combines the approaches detailed in FIGURES 2 and 3, but here the harmonics are sounded with “chop-like” taps onto the strings. FIGURE 5 adds one more twist, as the open fifth and sixth strings are sounded via pull-offs.

Let’s increase the complexity by combining all of these techniques, along with standard pick-hand fretboard tapping, as shown in FIGURE 6. Work through this pattern slowly and with great attention to detail; though the concept is not very difficult, it will require patience to sound each note in perfect rhythm and with precise articulation.

I’d like to offer a 'shout out' to Erik Mongrain, a wonderful French-Canadian guitarist known for playing in the lap-tapping style. If you are inspired by these examples, please check him out, as he is incredible!

FIGURE 7 weaves these techniques together into one relatively complex piece of music. Take each bar slowly and carefully while striving to sound all of the fretted notes, open strings and various types of harmonic types as purely as possible.