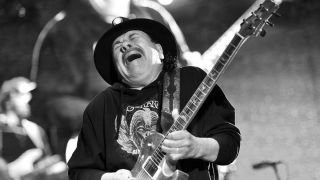 Welcome to this exclusive feature aimed at putting a bit of extra class into your blues playing using the spicy sound of Dorian mode. Both rhythm and lead guitar ideas are notated and after working through the examples, your blues guitar trick bag should be fully topped up. But first, let’s review what the Dorian mode is and how it functions musically.

Perhaps this all sounds rather complicated, but for our purposes today I’d suggest you think of the Dorian mode as the Natural Minor scale with a major 6th degree (just as you can visualise Mixolydian as the Major scale with a minor 7th (b7). The intervallic structure is therefore root, major 2nd, minor 3rd, perfect 4th, perfect 5th, major 6th and minor 7th.

To keep things simple all our examples are in the guitar-friendly key of A Minor and we have used an open key signature so you can see where the all-important major 6th interval is so keep an eye out for those F# notes in the transcriptions. Remember, these notes would be F in the A Natural Minor scale.

The Dorian mode has a sophisticated sound and you can hear it in all types of music; indeed, you may recognise it as the sound of minor key jazz and blues when used by players such as Kenny Burrell, Robben Ford and Carlos Santana.

Perhaps the best thing about Dorian is that, when it is played over the minor 7 chord, all the notes sound good. This means that, when improvising, any of the notes can be accented or played at length without the risk of sounding bad.

It is also a useful strategy to use the Minor Pentatonic scale as home base and then add in the two flavour tones (major 9th and major 6th) when required. Many blues guitarists would think of adding notes into their standard Pentatonic runs and with this method there is no need to know the theory, just which extra notes sound good to you.

We have put together 10 short rhythm and lead examples so you can get used to the Dorian sound. Then there are three full blues backing tracks to experiment with, completewith fully notated solos. The first track is a slow minor blues, the second has a shuffle feeland the third is more of a jazz -blues.

Why not try starting and ending some of your licks with these notes and see how different you can make your solos sound than when using the more conventional root, 3rd, 5th and so on. Many thanks to Universal Audio for the loan of the Apollo interface for the recording.

Have fun. See you next time.

We have written out scale fingerings for all five positions of the A Dorian mode. The easiest road into experimenting with this sound is to think of these fi ngerings as the A Minor Pentatonic with two added notes.

The two Dorian flavor tones are the major 2nd (B) and the major 6th (F#) so keep an eye out for these in the examples. We will be leaning on these flavor notes heavily to provide the characteristic sound.

This short example exploits the Dorian sound by including the major 6th (F#) in the sliding chord move. The notes on the sixth string are lightly palm muted. I’d strongly recommend the use of fingerpicking here, as it really helps in getting the correct feel.

The use of chords from the harmonised G Major scale can be used to imply the sound of the A Dorian mode (remember A minor is chord II of G Major scale).

Here we are placing the Em, D and C triad chords over the A bass note. Again a fingerstyle approach is the order of the day.

This example sounds sophisticated as it concentrates on exploiting the extensions (9th, 11th and 13th) of the A minor 13 chord.

Sliding into chords provides an instantly recognisable jazz style delivery that you can hear in Benson's work, plus that of Joe Pazz, Barney Kessel and Kenny Burrell.

This example features the ever popular Latin guitar trick of shifting one note in the chord (G to F#) to create an interesting sounding movement. The bass pattern shifting from A to E alternately is another feature of the Latin groove and you can hear both in the playing of Santana.

Here we have some expensive sounding fingerings for the A minor 11 and A minor 13 chords. There are no ‘avoid’ notes so you can stack notes that are close together interval-wise to provide some crunch and shimmer. These chords are typican of Texas rock legend Eric Johnson.

Our first lead example capitalises on example 1 by using the target tones of B and F# as bending points. The more F# is used, the more the Dorian sound will sound through.

This lick uses a four-note pattern that is then moved up an octave. The B Minor Pentatonic scale can be used as a substitution over the A minor 7 chord to create the A Dorian mode sound and this concept is demonstrated in the second bar of this track.

The Dorian sound is delivered in the second part of this lick. Ascending three notes from the major 6th (here, F#-G-A) is a tried and tested idea that works a treat.