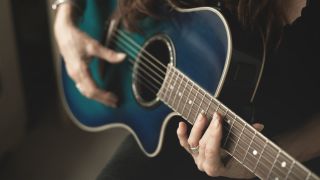 Natural harmonics seem to possess some special power to captivate the human ear. Often described as ‘floating’, ‘glistening’, or ‘bell-like’, these curious tones are produced by lightly touching particular points along a string rather than pressing it down to the neck.

Taken together, they in essence offer us a second, invisible fretboard - albeit, one without any actual frets (or, for that matter, board). The exercises below will help you to build an inner ‘map’ of these hidden notes, and to organize them systematically for use in improvisation, composition, and wider playing.

First up, let’s make sure we’re getting a strong resonance. These three top tips, demoed in the video below, will ensure your natural harmonics (NH) ring out cleanly. Try them on some 12fr NH to start with:

- Touch exactly above the fret position in question (i.e. the 12fr NH is ‘on top of’ the fret rather than just behind it). But also be prepared to make tiny adjustments - if the guitar has a high action then the NH will be slightly ‘out-of-sync’ with the fretboard.

- Pluck more firmly than usual (NH are quieter), and strike closer to the bridge too - listen out for a ‘sweet spot’. Maybe use a harder plectrum to boost clarity and volume, or try rest strokes with the thumb.

- The very lightest of left hand touches will usually do, and you can take your finger away as soon as you’ve set the string in motion. Be extra-careful of muting anything by mistake - here, we generally want the notes to ring into each other.

As you’ve doubtless already noticed, NH can be produced from many different positions along each string. The most important sequence to learn is the ‘harmonic series’ - the frequencies produced by touching a string at exactly half its length, then a third, then a quarter, and a fifth, and so on:

We’ll dig deeper into this concept later, but for now: here are the first 13 or so fret positions of the harmonic series (about as many as I can usefully get out of my guitar), ascending through four octaves above the open string tone (which is known as the ‘fundamental’).

See how most of the available natural harmonics are actually found ‘between the frets’ (e.g. the G# over 4fr is actually located at ~3.8fr). You really have to be precise as they cluster together at the end - and you may want to pick louder each time to compensate for the gradual decrease in volume.

Have a play around, and get more comfortable with the basic natural harmonic positions. Also note how the harmonics repeat themselves in the ‘gaps’ between the positions above - running your finger the whole way down reveals this fuller spectrum:

Here’s a map of this invisible ‘fretless fretboard’ (but don’t forget that repeated NH are in the gaps as well). See the detailed version at the end of the article too, with note names, intervals, fractions, microtonal deviations, etc - although this level of theorizing should always come after the sounds in question have been internalized. For now, all you need :

In more scientific terms, NH work by isolating specific ‘partials’ from the open string’s ‘fundamental’ vibration pattern. The full resonance of an open string (or any resonant tone) is nothing more than the sum of its partials - in theory an infinite sequence, although as we have seen, they rapidly fade away as you go up in pitch.

If you visualize how a string actually vibrates, it all becomes a little clearer. Watch the ultra-slow-motion (10,000fps) footage below, and try and visualize how and when the string’s movement path matches with the ‘string fractions’ image above: as the ‘kink’ moves towards the end, it momentarily passes through all possible fractional divisions of the string (halfway along, then 1/3, then 1/4, etc, all the way up).

Natural harmonics are basically just about isolating particular fractions from this series - hence their ‘purer’ tone.

(n.b. most ‘slow motion guitar string’ videos on YouTube aren’t quite what they purport to be, instead showing either ‘row-by-row’ pixel rendering, or coincident effects from the interaction of the string path and the frame rate of the camera…kind of like how a helicopter seems to hang in the air if its rotor speed matches the shutter speed of the camera. You need a really slow camera to see what strings are really up to!)

In other words, the harmonic series about ‘unpacking’ the different elements of the open string note’s full vibration pattern (for more on the science, see my Tuning: Impatient Meditation article).

To further embed all this, here are the first 16 tones, volume-equalized on a synth. Listen to how the microtones spiral away from what we feel we’re familiar with... although in fact, all these tones are hidden in the open string’s full vibration pattern:

Scales: We can use NH to construct full scales, freeing us up to improvise with them. Most usefully, you can build an Em pentatonic shape, and then add in other tones to make an oddly sparse Dorian sequence, colored by the subtle microtonal flavors of some notes.

Higher octaves: The ‘fractional’ nature of the string division process (halves, thirds, quarters, etc) means that you can always transpose things up an octave by ‘halving the size’ of your pattern - i.e. scales on 12fr & 7fr will also work on 5fr & ~2.7fr (albeit much more quietly). See all this in action here, with scale tabs below:

Melodies: The next natural step is to turn our scales into melodies. There are endless ways to do this - I’d suggest starting by learning a specific ‘loop’ phrase really well, focusing on optimizing tone clarity and rhythmic control.

When you’re comfortable then start to modify it, moving through different permutations of the scale shapes above. Here’s a bluesy, Hendrix-y example riff (again, it works an octave up too):

For a more percussive sound, you can produce NH by tapping the string. This works with either hand, but for now we’ll stick to the right. Try to strike only as hard as you need to, and hit right on the 12fr wire - the sound will have a characteristic metal-on-metal ‘thwack’ to it.

I find it hard to produce tap harmonics cleanly outside of the strongest few harmonic positions (‘thick strings, basic fractions’). But you can still have a lot of fun with them - e.g. this quick ‘Middle Finger Blues’, which substitutes three strong NH into a brief 12-bar form:

Finger tapping: You can also play tap harmonics by striking exactly 12 frets up from wherever your left hand is. I find the North Indian Raag Shivranjani (1-2-b3-5-6-8: the ‘Dorian no4/7’) to be a physically convenient shape to use here, as well as bringing a suitably mystical sound - although any scale will work if you’re precise enough.

This way you can summon a basic form of ‘polytonality’ (basically, having multiple key centers running in parallel), by letting some of the full string’s vibration bleed through along with the NH - producing two tones at once from the same string.

Thumb slapping: In similar fashion, we can slap with the thumb around the soundhole area, bringing out high, hidden harmonics from whatever chords are being fretted.

It’s a process of trial and error, and you’ll find that many of the sounds won’t really fit the chord in question (in essence, this is because each harmonic series only fits its own fundamental, being a ‘microtonal mismatch’ for all others).

But with some exploration, we can add some ‘ghostly’ high resonance to our rhythms in a controlled fashion, as in the video example. This technique can really confuse people, even if you show them how it works!

...and, just for fun - a few more extended NH techniques. First, we capitalize on their characteristically rich sustain by adding various forms of vibrato: tensing the neck, pressing ‘behind the nut’, and twisting the tuning pegs.

This final technique (‘twist harmonics’?) is a patchy DIY adaptation of techniques from steel-string virtuoso Jon Gomm’s famous Passionflower - he has customized machine heads, but you can get a lot of control even without them...if you take your time and hone your ears a bit.

Retune downwards rather than upwards - apart from avoiding breakages, reaching the notes will require less ‘turn’ each time as you go down:

I’ll leave the last impression to Jaco Pastorius - the ‘low-end Hendrix’ (or according to one YouTube commenter, the “Bruce Lee of bass”). He mastered natural harmonics like few others - in the words of more online fans, “The first time I listened to Portrait of Tracy on the radio I couldn't believe it was a solo bass guitar”...”I thought I heard a vibraphone”.

And perhaps best, “it makes me imagine I'm in an ice kingdom”. See if it cools you off after a challenging lesson! And also check out what Lenny Breau, Michael Hedges, Tommy Emmanuel, and Dawn of Midi get up to in this realm.

Fuller map: as promised, here’s the nerd version of the ‘fretless fretboard’ map, with positions, intervals, fractions, note names, etc (all labels explained below). I’ve organized it like an actual guitar neck (note the dots), but with diagrammatic ‘stretched frets’ so I can fit all the info on.