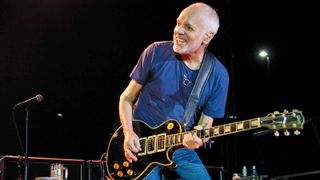 With album sales in excess of 20 million, English guitarist Peter Frampton is one of the most successful rock musicians in history, boasting gigantic pop hits like “Baby, I Love Your Way,” “Show Me the Way” and “Do You Feel Like We Do.”

The explosion of his 1976 double live album, Frampton Comes Alive!, was — until recently — the highest-selling pop album of all time (prompting Mike Myers to joke, in Wayne’s World, “In the Seventies, this record was government issue!”). What is sometimes overlooked is that Frampton is a phenomenally gifted guitarist, one who has been voted as one of the top 50 rock guitarists of all time in many polls over the years. That Frampton was able to apply his distinct, virtuosic playing within the framework of solid pop songs has earned him a spot alongside legendary guitar megastars like Eric Clapton, Jimmy Page, Pete Townshend, David Gilmour and Joe Walsh.

Frampton first came to international attention at the age of 18 when he joined with former Small Faces singer and guitarist Steve Marriott to form Humble Pie; their 1971 double live album, Rockin’ the Fillmore, was a smash on the strength of the band’s crushing cover of the Ray Charles song “I Don’t Need No Doctor,” which features brilliant soloing from the then-20-year-old Frampton, who was already displaying a unique sound and approach.

One of the earmarks of Frampton’s soloing style is that he blends the influences of blues and blues-rock with jazz and modal sounds, as evidenced by his leads in “I Don’t Need No Doctor.” The solo is played over a simple A5-C5-D5 progression, and the guitarist builds his lines from a combination of the A blues scale (A C D Eb E G: see FIGURE 1), with the A Dorian mode (A B C D E F# G: see FIGURE 2. FIGURE 3 demonstrates these two scales woven together.

Also played in the key of A minor, FIGURE 4 offers a four-bar passage along the lines of how Frampton launches into his solo on the track. With phrases built primarily from steady 16th notes, there’s an abundant usage of color tones such as the sixth, F#, the ninth, B, and the flatted fifth, Eb, all delivered via a legato articulation approach that incorporates hammer-ons, pull-offs and string-bends. In bar 3, the minor triad arpeggio based on the fifth, Em, is superimposed over the A tonal center, with emphasis on the notes E, G and B. The jazz-influenced approach of superimposing alternate triadic arpeggios can be found in many of Frampton’s solos, and he has used this tactic to enrich the harmonic content of his solos beyond that of a typical blues-rock guitarist’s vocabulary. FIGURE 5 is inspired by the second half of Frampton’s solo, and here we revisit the use of the Em triad over A5 chord in bars 1 and 2. In bars 3 and 4, the solo wraps up with a descending line that’s based on A Dorian and built from a sequence of eighth-note triplets.

Another great Frampton solo featured on Rockin’ the Fillmore can be found in the track “Stone Cold Fever,” which is played over an Em vamp. For this solo, the guitarist relies on the E Dorian mode (E F# G A B C# D), as illustrated in FIGURE 6, combined with the E blues scale (E G A Bb B D). FIGURE 7 presents a seven-bar solo along the lines of how Frampton starts his. In bar 2, the five-minor approach of the “I Don’t Need No Doctor” solo is employed once again, this time in the key of E minor, with the relative five-minor triad being Bm (B D F#). In the following bar, this arpeggio superimposition concept is moved from the five-minor to the two-minor, which in the key of Em is F#m (F# A C#). Bar 5 pushes into other harmonic territory for a moment with the incorporation of the two-note forms B5 (B and F#) and C5 (C and G), and the passage wraps up in bars 6 and 7 with lines based on a combination of E Dorian mode and E blues scale.

One of Frampton’s most beloved songs is “Lines on My Face,” which he initially recorded for the 1973 album Frampton’s Camel and included in expanded form on side four of Frampton Comes Alive! “Lines on My Face” is a very interesting song that moves freely between the keys of C major for the chorus section and A minor for the verses and solos. Frampton chooses to play lines based on the C major scale across all of the song’s chords, which results in modal-based harmonies for each chord. FIGURE 8 illustrates the C major scale, also known as the C Ionian mode (C D E F G A B). The intro and verse move repeatedly between Fmaj7 and G6, and when the notes of C major are played over Fmaj7, the sound of the F Lydian mode (F G A B C D E) is created, as shown in FIGURE 9. Likewise, when these notes are played over G6, this creates the sound of G Mixolydian (G A B C D E F); see FIGURE 10. And over Am, we get A Aeolian (A B C D E F G); see FIGURE 11. Notice that each of these modes is built from the same set of notes but starting at different points in the sequence.

The intro and verses to “Lines on My Face” begin with the repeating chord progression Fmaj7-G6, and for the Frampton Comes Alive! version, Frampton solos over these chords during the song’s intro. FIGURE 12 offers a three-bar improvisation inspired by this intro solo, and in bars 1 and 2, the lines are built primarily from steady 16th notes. Notice how the same handful of notes that form the C major scale sound completely different and provide interesting melodic options when played over the Fmaj7 and G6 chords. In bar 3, the lines are played in double-time as steady 32nd notes, quickly ascending and then descending through the scale tones. Practice this phrase slowly at first, paying attention to precision in both the pick-and fret-hand articulation.

The legendary closing track on Frampton Comes Alive!, “Do You Feel Like We Do,” features an extended open-jam section in the key of D minor during which Frampton gets to stretch out and solo at length. FIGURE 14 offers an eight-bar solo played along the lines of his initial improvisation in this classic performance and kicks off with lines based on D minor pentatonic (D F G A C), but the five-minor superimposition approach is soon revisited. At the end of bar 1 into bar 2, the notes A C and E are played, which form an A minor triad. Bar 3 ascends through the D blues scale (D F G Ab A C), and the end of bar 3 into bar 4 there’s a quickly repeating phrase based on a “threes-on-twos” rhythm.

In bar 5, another Am triad, in descending form, is played over D, and the passage ends with bluesier lines based on D minor pentatonic, played in a more Clapton-like style.

Frampton's most popular and well known song is “Show Me the Way.” He originally recorded the track for his 1975 studio album Frampton, but it was the live version featured on Frampton Comes Alive! that became the celebrated megahit. The guitarist’s deft use on this track of the Heil Talk Box, a device designed from a tweeter speaker that sends the guitar signal through an affixed plastic tube that the player holds in his mouth in front of a vocal microphone, resulted in the invention being most closely associated with him, though it had been used previously by Joe Walsh (“Rocky Mountain Way”), Joe Perry (“Sweet Emotion”), Jeff Beck (“She’s a Woman”) and others.

The intro and verse sections of “Show Me the Way” move between the key of D major and its relative minor key, B minor, and Frampton utilizes the D major scale (D E F# G A B C#) to play over both chords, as this note set also forms the B Aeolian mode, also known as the B natural minor scale (B C# D E F# G A). FIGURE 15 illustrates both modes, and FIGURE 16 presents an eight-bar solo inspired by Frampton’s solo in this live performance. Notice how, over the D and D/C# chords, the notes of a D major triad (D F# A) are emphasized, and when the progression moves to Bm, the notes of a B minor triad (B D F#) are emphasized, so that the phrases closely follow and describe the chordal harmony.

In February, Frampton announced that his next tour — kicking off in Tulsa, Oklahoma, last month and wrapping up in San Francisco in October — would be his last. We wish him all the best and thank him for all the great music and memories!