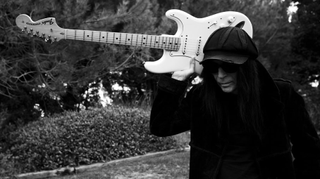 This interview first appeared in the October 2013 issue of Guitar World.

The number of guitars that Mick Mars has gone through over the past three decades in the limelight with Mötley Crüe is enough to make any guitarist jealous.

Literally hundreds of instruments passed through his hands in the '80s alone, from the trusty black 1972 Les Paul Custom that he used to record the band’s early albums to various Kramers, Charvels and Hamers in every imaginable shape.

“I’ve gone through a lot of ups and downs over the years,” Mars explains. “The ’72 Les Paul Custom that I used to play in the early days is now hanging in a Hard Rock Café somewhere in Florida. I didn’t want to let go of that guitar, but I was forced to do it. I don’t miss the pointy guitars. They all sounded really bad to me, and I hated all of them. They just didn’t work for me.

"Companies kept giving me all of these different guitars to try, and I would end up trying to break them. Now they’re all either kindling or I sold them off long ago.”

Although Mars acquired a few vintage instruments during the '80s, he began to pursue them in earnest during the early '90s, around the time that the band recorded its 1994 Mötley Crüe album with singer John Corabi.

“That’s when I started playing Fender Strats,” Mars says. “I owned a few vintage Stratocasters by then, and I loved how light a real Strat felt. One of the first real Strats that I ever owned was pieced together using ’63, ’64 and ’65 parts. I bought it for $1,200 while we were on the Girls, Girls, Girls tour in 1987. The pickups didn’t work, so I put humbuckers in it and installed a Floyd Rose. Even though it’s really beat up, it’s a player’s guitar. I still use it onstage and in the studio.”

When Mötley Crüe hit a rough patch during the late '90s, Mars was forced to sell off many of his prized vintage guitars. Thanks to the band’s recent resurgence in popularity and much more efficient (and honest) management team, he’s been able to build up his collection once again.

“I’ve slowly and carefully rebuilt my collection,” he says. “I got really serious about collecting guitars again about 10 or 12 years ago. I now have about 100 guitars. I managed to keep some really cool instruments, but I like to have a lot of different things to play around with, so I’m always adding something new to my collection.

"I have guitars from the '50s and '60s as well as a few '70s guitars. Some are really cool, and some are my player guitars. I don’t have very many guitars that I don’t play much. Even if I don’t take a particular guitar on tour because it’s too valuable and difficult to replace, it usually gets played in the studio.

“In the studio I go for a lot of different tones,” he explains. “I never record an album using just one guitar and one amp. Sometimes I’ll start a track with a stock Strat and do overdubs with something funky, like an old Harmony. I like to put something that sounds trashy behind something that sounds really good. That makes the track jump. I’ll use just about any guitar you can imagine in the studio. It’s all about what you do with the different tones and how you mix and match them.”

Because Mars has remained a dedicated Strat player since the early '90s, a considerable chunk of his collection consists of vintage Strats, mostly from the Sixties. Notable pieces include three 1962 models with black, Fiesta Red and Olympic White finishes, a 1964 with a beautiful Shoreline Gold finish, a black 1965, a Dakota Red 1966 and an Olympic White 1969.

“I started buying stock Strats after I got that pieced-together one in ’87,” he says. “My earliest one is from the early '60s. I’d love to get a '50s Strat, but they cost too much now. At one time I had every year of Stratocaster, including a ’59 and a ’58 ‘Gloria’ Strat that I really loved, but I had to let them go.

"I’d really love to find another ‘Gloria’ Strat. This lady at the Fender factory back in the '50s named Gloria [Fuentes] put them together. She did the final assembly - bolting the neck on, putting the pickups in, installing the pickguard and so on. She’d put a piece of masking tape with her name and the year the guitar was built on it in the guitar’s body cavity. That ‘Gloria’ Strat was one of the best-sounding stock Strats I’ve ever owned. When I plugged it into a Marshall, it would just scream.”

Mars’ favorite '60s Strats were made in the mid '60s just after the company first increased the size of model’s headstock. “Strats with the transition logo [combining the gold lettering and black outline appearance of the earlier spaghetti-style logo with the thicker script of the post-1967 CBS-era logo] and larger headstock sound better,” he says, “although I personally prefer the look of the all-black CBS-era logo. I’ve been looking high and low for a ’67 Strat for that reason.

“Sometimes I’ll just run across things and go, ‘I want it.’ When Fender made the Eric Clapton Blackie replica, I just had to have one. John Cruz at the Fender Custom Shop makes a lot of guitars for me, and when I told him I got a Blackie, he asked if mine says ‘Blackie’ on it.

"I took a look at it and told him no, and he said that mine is one of the earliest ones that they made, and that it’s worth more than the others. My Fiesta Red ’62 is a real player. It’s in great condition, but I had to have it re-fretted. It only had wear on the first three or four frets, but they were worn all the way down to the wood. The previous owner must have only played open chords on it, but he played the hell out of them!”

Although the Strat remains Mars’ favorite guitar, he also has a soft spot for Telecasters. Old-school Mötley Crüe fans may remember the Telecaster-shaped Kramers that Mars played on tour during the mid '80s. “That was a transitional guitar for me,” he recalls. “Nobody was playing Teles back then, so that inspired me to play one. The problem with those Kramers is that they were really heavy. I loved the way they looked, though.”

One of the most valuable guitars in Mars’ collection is a stock 1951 Esquire.

“I found that through a vintage guitar dealer,” he says. “I traded it for several guitars that I wanted to get rid of. The dealer needed some less-expensive guitars that he could turn around and sell more quickly. I had various '70s guitars and a few acoustics, including some older Ovations, that I wasn’t using, so I traded them for the Esquire.

"A while later the guy called me back and asked if I was interested in trading the Esquire for Waylon Jennings’ leather-covered guitar, which he had just gotten. I tried it out, but it was so out of whack that I didn’t really want it. The leather chokes off the tone.”

Mars may be an avowed Fender player, but he still appreciates classic Gibsons, like the Les Paul Custom he played during Mötley Crüe’s early days. At one time he owned three sunburst Les Paul Standards - two 1959s and a 1960 - but he currently owns just one 1960 Les Paul Standard, which was a relatively recent replacement for the ones he was forced to sell.

“It’s one of the later 1960 Les Paul Standards with the metal cap knobs,” he explains. “The red in the sunburst is still nice and bright. It needs to have a couple of things done to it to make it 100 percent original again, so I was able to get it pretty cheap. The original tuning pegs had shrunk and crumbled. The guy I bought it from replaced the tuners, but he used the wrong ones.

"I’m looking for some original 1960 tuning pegs for it, but I’m having a heck of a time finding the right ones. Everything else is straight on it. It’s a beautiful guitar with just a little wear and tear, but it sounds and plays incredible. The other Les Paul Standards I owned didn’t sound nearly as good as this one, so I don’t mind that I had to sell them, even though they were more valuable. I bought this guitar to play it.”

Mars also owns a few Gibson Firebirds, including a 1965 reverse Firebird III with a standard tobacco sunburst finish and a mid-'60s Firebird with a very rare Inverness Green finish. “The ’65 is very clean,” he says. “A lot of Firebirds had their headstocks broken off over the years, but this one is intact and completely stock. I love the sound of its two mini-humbucker pickups. They have a lot of character and sound different than my other guitars.”

Mars’ main stage guitars are heavily modified Strats with custom-wound 16k-ohm humbuckers made by JM Rolph in the neck and bridge positions, a middle single-coil and a locking Floyd Rose tremolo. Still, he’s more of a purist when it comes to vintage guitars, preferring to buy instruments in original stock condition.

“I don’t mind guitars with a little wear and tear on them,” he explains. “That just means that they’ve been played. Many vintage guitars in mint condition don’t sound that great because they’ve never been played or they never sounded that good to begin with. A lot of great older guitars got ruined when people started replacing pickups in the Seventies. It wasn’t really necessary to do that on a lot of those guitars, but guitarists didn’t know any better back then. It was just the thing to do. I’ve had to pass on a lot of guitars that were otherwise great because the original pickups were replaced.

“If I could afford it, I’d go to Japan to buy guitars,” he concludes. “The Japanese generally won’t buy a guitar unless it’s 100 percent original. The problem is that they’re willing to pay more, so prices in Japan are too damn expensive! Some of the stuff they’re selling is in such good condition that you don’t even want to look at it!”

He laughs. “Sometimes it’s worth paying the extra money, though. I’m having a heck of a time finding tuning pegs for my ’60 Les Paul, and I probably could have saved myself a lot of trouble if I bought one that was already in original condition. But these days, a 100-percent-original sunburst Les Paul can cost anywhere from $300,000 to half a million. I’d rather buy a Ferrari for that much money. I’m a guitar nut, but to me that’s way too much money!”