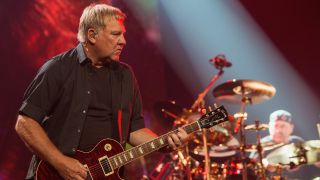 Since the death of Rush drummer Neil Peart in January after a prolonged battle with brain cancer, his bandmates, Geddy Lee and Alex Lifeson, have been relatively silent when it comes their past music, as well as the potential for any new work in the future.

But in a new appearance on WFAN's Talking Golf With Ann Liguori show Lifeson offered some thoughts about Rush, as well as his relationship to the electric guitar since losing Peart.

Regarding whether he and Lee talk about getting back onstage together Lifeson said, "Not really. It's been difficult. After Neil passed in January, I've played very little guitar. I don't feel inspired and motivated. It was the same thing when [Peart’s] daughter died in a car accident in 1997; I didn't really play for about a year. And I just don't feel it in my heart right now.

“Every time I pick up a guitar, I just aimlessly kind of mess around with it and put it down after 10 minutes. Normally, I would pick up a guitar and I would play for a couple of hours without even being aware that I'm spending that much time. So I know it'll come back.

He continued, “I don't know if the motivation is there for us to really do anything now. We're certainly proud of our track record, and we still love music. But it's different now."

As for whether he misses performing, Lifeson said:

“I miss performing in its essence – get onstage, playing, especially when you're really in good shape, you've rehearsed and you know everything, it's effortless. I do miss that aspect of it.”

But, he added, “I don't miss the touring. The only thing of touring that I miss is not playing golf every day in a different fantastic golf club. But the rest of it  –  sitting in a hotel room, being away from my family, being away from friends –  it's a price you pay, and in the whole scope of things, it's not that great a price for the return.

“But still after 40 years of being away from your family particularly, it becomes difficult. And after now, it's been almost five years since the last tour, I can't say that I really miss it at this point. Maybe a year or two after we stopped, I probably missed it more. But I've settled into it now, and I quite like my life and what I'm doing. I keep active in music, and I'm so in love with golf during the summer, and I'm close to my family. It's a very good balance for me."

Lifeson also said that he and his bandmates were “beyond brothers,” and that he is in consistent contact with Lee.

“I'm in touch with Geddy regularly. Before this whole COVID-19 pandemic situation happened, Ged and I would see each other every week – we'd go for dinner or at least talk to each other.

"It's been a little crazier now because of this whole thing and this adjustment that we've made these last few months, but we're still in touch, and we'll always have that friendship, right to the end of our days."