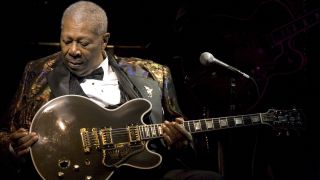 The guitar was the centerpiece of Julien’s Auctions’ Property from the Estate of BB King sale, which featured nearly 600 items owned and used by the legendary bluesman.

As is common knowledge, King bestowed the name Lucille on many guitars over the course of his long career - in fact, just last year Gibson introduced a new Lucille tribute model in Alpine White.

But the model sold at auction, a black Gibson ES-345 prototype 1 for 80 limited edition that was gifted by Gibson to BB King on his 80th birthday, is notable for having served as King’s primary stage guitar in his later years.

Unique touches on the limited edition Lucille include a headstock boasting 'BB King 80' and a mother-of-pearl crown; a pickguard similarly imprinted with a crown and 'BB King' in gold; and custom 'BB' covers on the pickups.

The guitar also came with a hard leather case with 'BB King' embroidered in gold.

The Lucille prototype was just one of many guitar highlights of the Julien’s auction. Other drool-worthy instruments that went under the hammer included a stage-played black 2005 Gibson ES-345 Special Edition Lucille gifted to King to commemorate his 83rd birthday (sold for $43,750); a Gibson ES-355 Stereo model from 1969 ($31,250); a sunburst Gibson Custom model ($25,000); and King's gold-finished "Merry Christmas" Gibson Lucille, featuring a Christmas tree drawing on the body ($25,000).

Head to Julien’s Auctions for more on the Property from the Estate of BB King sale.