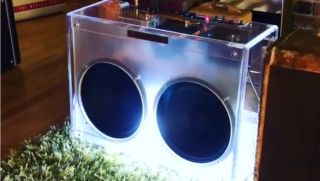 Joe Bonamassa has been outspoken in his love for Fender’s legendary  “high-powered" ‘59 tweed Twin-Amp guitar amplifier, so much so that last year he whipped up his own reissue of the fabled unit, the ‘59 Twin-Amp JB Edition.

Now, Bonamassa has taken his Twin-Amp affection one step further, unveiling on his Instagram a see-through version constructed with a Lucite enclosure.

The new model is a one-off custom build from Fender, which Bonamassa jokingly gives a “glowing review.”

Here’s a fun one for you amp nerds. The world’s first and possibly only Fender high power Twin Amp in lucite. 😎👍🤷‍♂️Thank you to Stan and all the folks @fender for all the help on this project. Joe Bonamassa

There’s also two 12” Celestion JB-85 speakers, which can be seen prominently in the new Lucite version as well.

“In my opinion, it’s the epitome of amp building,” Bonamassa told Guitar World about the Twin-Amp earlier this year. But he may have just raised the bar a bit more.

To hear the transparent beauty in action, see below.

I love it when a plan comes together... its rather good right out of the box. As a matter of fact I would give it glowing review. @fender 😎👍🤷‍♂️😂 Joe Bonamassa