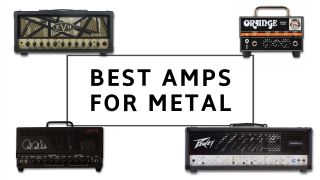 Not all amps are made the same – at least in the eyes of the metal gods. And while there’s no shortage of distortion pedals out there that could happily turn even the cleanest of twins into a raging bloody-eyed beast, many of metal’s heaviest riffers would happily admit it’s all about the amp sound, first and foremost. And that's why we've compiled this guide to the best amps for metal.

Models designed with both lower tunings and extreme gain settings in mind will naturally require less pedals for added drive or EQ shaping, offering users the chance for a more direct signal path.

There’s plenty of options out there. Whether you're looking for a dependable, affordable workhorse from the likes of Marshall, PRS and Orange; or are tempted by uncompromising, mid-price standouts from EVH, Peavey and Mesa/Boogie – there's something here for everyone.

What are the best guitar amps for metal right now?

Overall, the best of the best has to be the PRS MT15 Mark Tremonti. Tremonti [of Alter Bridge, Creed and Tremonti] likes his 15-Watt PRS signature lunchbox so much that he used it for the bulk of his heavier tones on Alter Bridge’s latest album, Walk The Sky.

“I had my MT15 front and center,” he recently told Guitar World. “It’s become my main amp at home. Whenever people come round, they’ll try all the Boogie, Bogners and Friedmans and - honestly - that’s the one they get blown away by.”

Not only does it look cool, switching from the crystal blue lights of its clean channel to the fiery reds of its lead mode, but the overdriven sounds are good enough to rival what you’d expect from boutique amps retailing for up to four times as much.

If you're looking for a more versatile amp, the Hughes & Kettner GrandMeister Deluxe 40 will cover your tonal needs in full. It’s the kind of amp many would buy just to use at face value, plugging in and switching between its shimmering cleans and thunderous high gain - but for tweakers, there’s the added benefit of having all the control you’d ever need.

With any amp – metal or otherwise – it’s worth bearing in mind where it will be getting most of its usage. If that’s at home, you might not want to invest in a Friedman 100-Watt stack that you’ll never get the chance to crank without inviting angry visits from your neighbors.

There’s always the option to get an attenuator, but instead of spending more money, you could actually save yourself a fair bit of change by opting for something at a lower wattage. Not only would it be cost-effective, but you’d also be able to drive the valves more and hear them truly at work.

It’s also worth considering what kind of gain you're after. Pre-amp valves play a big part here – EL34s or EL84s will generally offer more of a creamier, British-voiced sound, while 6L6s have generally been associated with Fender’s world-famous compressed cleans and the full-throttle high gain offered by Mesa/Boogie amps.

Other amps like the EVH 5150III feel much better suited to the sharp precision of higher gain metallic thunder, from the Van Halen-like tones its name would suggest though to Gojira levels of extreme, though its clean and crunch sounds may feel somewhat disposable by comparison. That said, guitarists who don’t really plan on spending much time in its un-driven mode won’t really be losing anything here.

The MT 15 Mark Tremonti is a two-channel “lunchbox” amp powered by a pair of 6L6 output tubes and six 12AX7 preamp tubes. Similar to the PRS Archon, the MT 15 features five gain stages before the Master for full, lush distortion. And while the MT 15 was designed with heavier players - such as the Alter Bridge and Tremonti axeman himself - in mind, the amp offers a range of tones for guitarists working in a variety of styles.

Additional features include an effects loop and bias adjusters that are accessible from the back panel for ease of servicing, as well as a half-power switch that takes the amp from 15 to 7 watts.

The compact MT 15 comes in an all-steel chassis with a perforated lid and black-matte finish. Additionally, when powered up, the MT 15’s valves are lit by LEDs which glow red for the Lead channel and blue for the Clean. A striking and very cool aesthetic touch.

A serious tool with the capability to withstand just about anything a guitarist can throw at it.

An updated version of the most successful model in Hughes & Kettner's TubeMeister range, the GrandMeister 40 Deluxe is a serious tool with the capability to withstand just about anything a guitarist can throw at it. The GrandMeister has a smart steel case and Perspex control panel featuring nine knobs and a big four-way rotary voice switch.

Aside from the amp's master volume, everything is MIDI-powered. MIDI controls the built-in five-step attenuator, series effects loop, boost voicing and phenomenal built-in digital effects. Of course, you can also edit and store presets to your heart's content.

The amp's two American-voiced lead channels have massive amounts of gain - perfect for modern drop-tuned metal - with a wonderfully sculpted top-end that squeals and snarls on demand. The built-in noise gate does a nice job of eliminating the hiss on higher gain settings and the new, thicker voicings sound equally fantastic with regular single coils and PAF-style humbuckers.

The Ultra channel's attack also gets you just about where you need to go for extreme metal. Overall, the Hughes & Kettner GrandMeister 40 Deluxe is a durable, formidable and practically perfect amp.

A pint-sized hybrid amp with an atomic gain section

The Orange Micro Dark sure is tiny but it is more than capable of tones that will scorch the neighbor’s lawn, perfectly voiced for the sort of high-gain behaviors as exhibited in the wild by the heavy metal sect.

The set up is simple. It’s a single-channel hybrid amp with a solid-state power section being fed by a preamp that’s got a single 12AX7 tube to give its crunch a nice and juicy dynamic response. The control panel has knobs for volume, shape and gain, with the shape control running from a predominantly mids-scooped tone at one extreme to a more mids-heavy, punchy tone at the other.

At 20-watts, the Micro Dark is more than powerful enough for band practice or small gigs – cab permitting – and with an emulated headphones output it is ideal for late-night silent practice. Run it clean, run it fierce, there’s plenty of range on that gain control, and a buffered effects loop on the back for hooking up your pedalboard.

£1,621
View at Bax-shop UK
No price information
Check Amazon
See all prices (2 found)
Tones are refined in incredible detail
Included MIDI controller provides access to a wealth of features
Notes always retain clarity, even with the aggressive Crunch and Lead channels
It's quite heavy!

Developed in collaboration with Misha Mansoor of Periphery, the Peavy invective .120 amp head is built to fit every need of today's modern progressive metal guitarist. Four JJ 6L6 tubes provide 120 watts of output, while the 6L6s can be swapped for EL34, 6CA7, 6550, KT66 or KT88 tubes for different tonal personalities and performance.

Six 12AX7A tubes provide gain for the clean channel and crunch/lead channels (with six gain stages for crunch/lead) and phase inverter and loop driver functions. The included footswitch can control individual channels and functions and provides instant access to nine user-programmable presets or control of an external MIDI device.

The invective .120’s tones are familiar but refined in exquisite detail, and range from the cleanest cleans to densely layered high-gain harmonic overtones with percussive attack and tight decay. The amp can push high-gain distortion to extreme levels, yet the sound never gets compressed into mush. With its versatile functions and performance features, the invective .120 is truly one of the best metal amps out there.

Amazingly versatile and incredibly aggressive, this is one of the most impressive amps to come along in recent times.

Amazingly versatile and incredibly aggressive, the EVH 5150III EL34 50-watt head is one of the most impressive amps to come along in recent times.

The Katana can pretty much do anything. Jazz-funk? Sure. Spanky clean country? Yippee. There are five amp types onboard, which effectively means the Katana is a five-channel amp, with Clean, Crunch, Lead, Acoustic and Brown amp models. Factor in all the Boss effects and you see what we mean about it being a Swiss Army Knife for tone.

But this is the best metal amp buyer’s guide so let’s just get down to it. The spandex-legged of you might then want to park yourself in the Brown channel, which is lifted directly from the Boss Waza amplifier and will put the E into the VH of your rock tones. The Lead amp, meanwhile, has all the gain you need to turn your signal into something that could saw through concrete.

Dialing in tones is a cinch. There is a variable power control so you can switch it down to half-power or a measly 0.5-watts to get super-cranked tones at bedroom level. There is also stereo expansion possibilities, an effects loop – but then with 60 effects available via Boss’s Tone Studio software you might not need them.

The Mark Five: 35 is perfect for whatever breed of dirt your heart desires.

The Mark Five: 35 amp head has two independent channels, each with three modes: Clean, Fat and Crunch on Ch1; MkIIC+, MkIV and Xtreme on Ch2. A 5-band EQ can be selectable per-channel to be on, off or footswitch-enabled. In addition, there are independent, footswitchable Solo level controls for each channel, as well as Reverb and a 35/25/10-watt power option.

Sonically, the Mark Five: 35 offers aggressive metal tones in its creamy yet sizzling high-gain settings - all with lots of beating overtones amid string bends - and delightfully malleable sustain and controlled feedback.

Vintage, Eighties-style metal comes from Ch2’s absolutely blistering MkIIC+ setting, while a more modern tightness and thump sprouts from the amp when set to Xtreme. But the Mark Series amps have always been more than just shred machines, and judicious gain settings easily straddle classic rock, punk, garage, grunge, or whatever breed of more restrained dirt your heart desires.

Marshall magic, without the 401-k-robbing prices

The 20-watt, two-channel DSL20C comes loaded with a pair of EL34 power tubes and three ECC83 preamp tubes, with a single Celestion Seventy 80 12-inch speaker housed in the semi-open-back cabinet. There are two individually voiced channels - Classic, which delivers a variety of seminal Marshall tones, and Ultra, which straddles a fine line between the beloved Marshall tones of the late Seventies and Eighties and modern high-gain textures.

Each boasts its own Gain and Volume knobs, a shared set of EQ controls (treble, middle, bass, presence and resonance) and a reverb level control. Full-(20-watt) and half-power (10-watt) settings are selected via the standby rocker switch, and a Channel Select switch lets users manually change channels when the footswitch controller (which is included with the amp) isn’t connected.

A highly versatile amp, the DSL20C delivers various flavors of classic, coveted Marshall tones, but priced low enough for beginners to consider as their first amp. At the same time, it doesn’t skimp on features, making it ideal for more experienced players who crave some Marshall magic in their studio arsenal without robbing funds from their 401Ks.